It’s hard to say which one is more famous – Ditte van der Meulen or her orange bike. Ditte’s pedalled that effervescent icon through some of New Zealand’s roughest backcountry and straight into the pages of photographer partner Dave Mitchell’s Mountain Biking South and Mountain Biking North guidebooks and calendars, and Ground Effect catalogues. 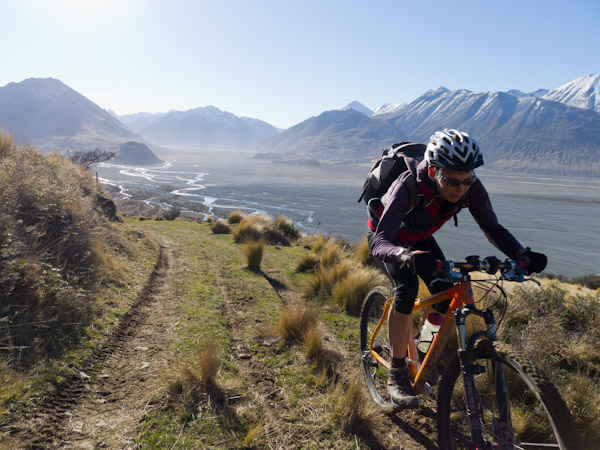 So how did this quiet, low-key physio from the Netherlands come to be the face of backcountry mountain biking in New Zealand?

Finding the trailhead in Kiwiland

“I’m a physio and there was no work in the Netherlands when I finished my training, so I did a whole lot of travelling, working in different countries in Europe and Middle East. Then I thought, ‘Hmm… where else could I go?’ I’ve always been into the outdoors, and I met quite a few New Zealanders in Saudi Arabia, and they said ‘Oh, come and have a look at New Zealand.’ And so I did, and I stayed.

I picked up my first mountain bike in New Zealand, actually, in 1992. Being Dutch, I’ve always biked – as in commuting to school, to university, work, you know, dah-de-dah, but never as a sport. But I managed to score a locum at Mt Maunganui, and got in with some people that were into mountain biking. I got to borrow a bike and I never looked back. 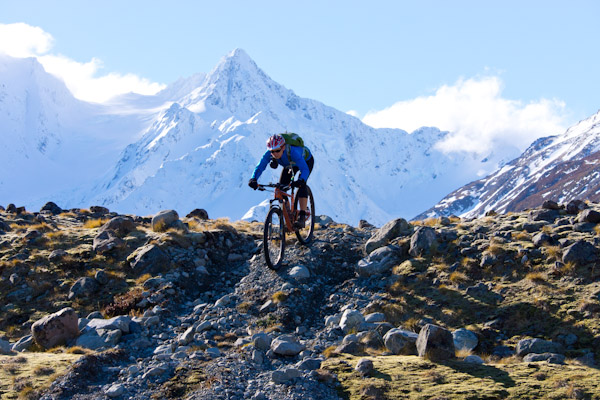 I travelled around New Zealand for a bit. When I permanently immigrated here, in 1995, I decided to come to Christchurch because the work was here. I was doing a duathalon on some mountain bike tracks at Bottlelake Forest, and I was racing against a girl and we were really level. We ended up talking after that and she said ‘I’m in the Canterbury Mountain Bike Club. You should come for a club meeting.’ And so I did, and I did a whole lot of rides with the club, and that’s where I met Dave.” 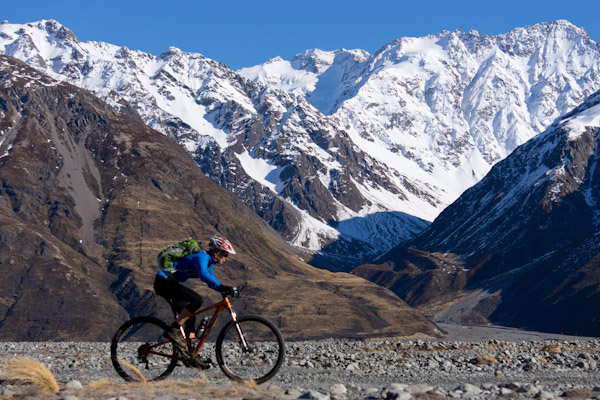 “Basically, you had to prove yourself to be invited to come riding with Dave’s inner circle. You had to prove that you weren’t just, you know, a flat rider, so to speak, and that you didn’t mind carrying your bike and doing a bit of harder stuff. I definitely remember the first trip we did. I guess I qualified because I wasn’t moaning and I wasn’t too far behind. And that’s how I got into the group that Dave was biking with. That’s how it all started.

I like backcountry, big trips. A bit of carrying I don’t mind, and climbing rather than flat riding. I’m not very good at the flat. I like singletrack as well, of course, but not obviously man-made singletrack. A variety, really. I think the most I’ve carried my bike has been a two and a half hour up-hill, on no track, on tussock, basically. 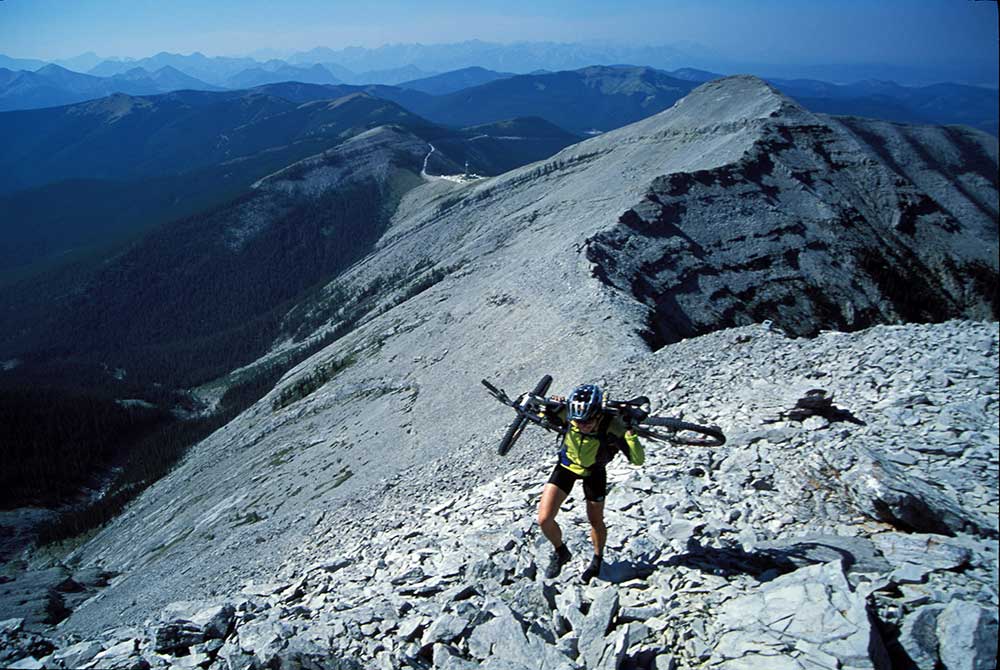 We try and go as light as possible because otherwise it’s just really awkward, especially if we’re doing a lot of climbing or singletrack. Dave and I can just get away with a 25 litre largish daypack each if we’re doing an overnighter. We take just one tiny little sleeping bag each and an inner, and a coat and a change of clothing for in the hut – one pair of long johns and one top. That’s about it – the rest is all food. We’re cold at night quite often, especially if the fire in the hut is not that good or there is no firewood. We sacrifice a bit of warmth for comfortable riding. 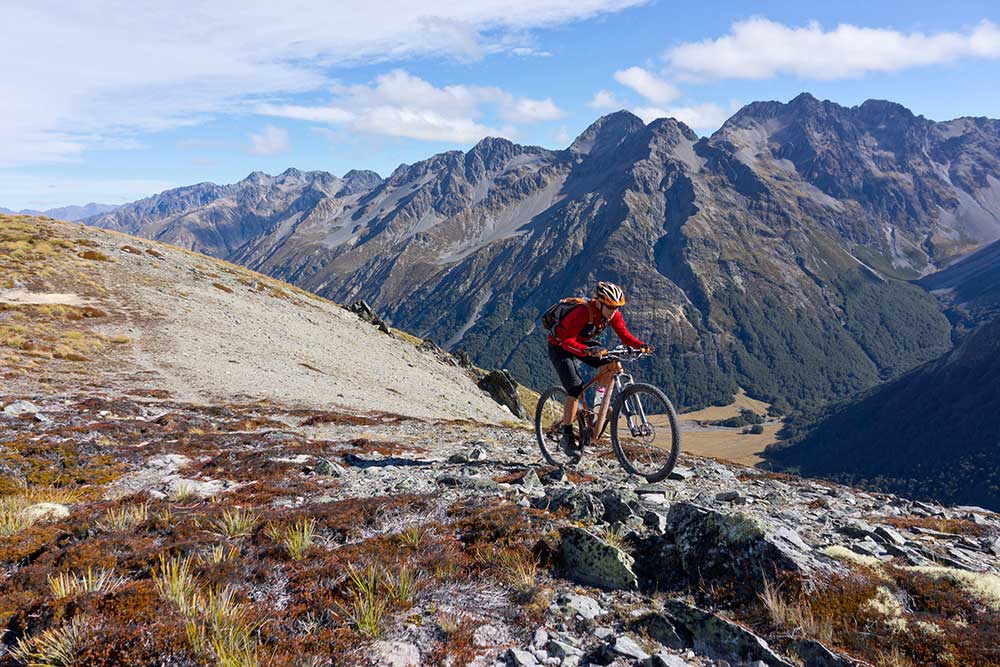 If anything, sometimes I take too much. But you just never know what the weather is doing in the backcountry, so I tend to take a little bit too much and then end up carrying it. I have only ever in my real, real early days been caught out in shorts in a southerly here – I should have taken longs, which I didn’t do. But that was before I got to know that the Canterbury weather can change. Now I tend to dress for the carpark and then take stuff off.”

“Dave and I bought a campervan, and it’s been fantastic. We still only really go away if the weather forecast is good, but with the campervan we can arrive late and we don’t have to put a tent up, we just pull up and roll our bed out. It has allowed us to go away more. With the campervan, we’re away three out of four weekends in the summer, I would say, and the odd winter weekend. Yes, I definitely recommend it!”

“I have a Giant Anthem. I had been riding a 29er for quite some time. I’ve always been a hardtail girl but Dave has just talked me into full suspension. On our last holiday I was on a hardtail and Dave was on a full suspension, and I could see that he was a lot less tired than I was at the end of a ride, and it looked more comfortable. So I got myself one and I must admit he was right. 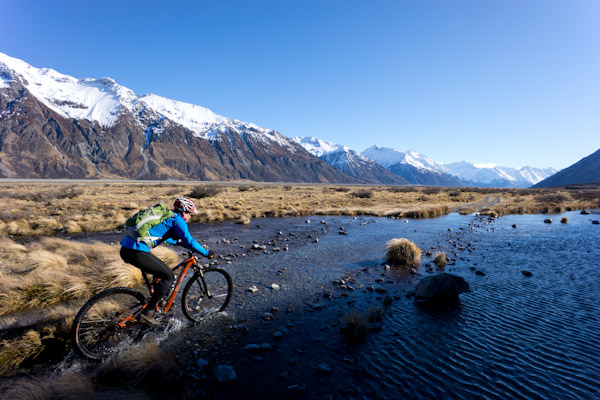 It’s just a cross-country bike, with only about four inches or so of suspension. It’s been great. It climbs really good. Because I want a bike that climbs really well. It’s a lot more comfortable, and I’m not completely worn out after a long day. I’ve still got a 26er hardtail as well. If I go for a ride by myself after work, I might use that. But for bigger trips, it’s the Giant full suspension.

That was the other thing: these Giants come in real boring colours, and I said, ‘I don’t want to ride a grey bike like so many others.’ So Dave organised it to be painted. It’s sort of coppery orange now. Very nice. Being Dutch, orange is my national colour.”

“Sometimes I see the Ground Effect catalogue and think ‘Oh, not my photo again’. But I always have a helmet on and it’s only people that know me that recognise me, otherwise it’s ‘Oh well, it’s just another mountain biker’. I have different helmets and packs, and a couple of bikes – one is orange, but one is silver-looking. So I look a wee bit different in different photos. 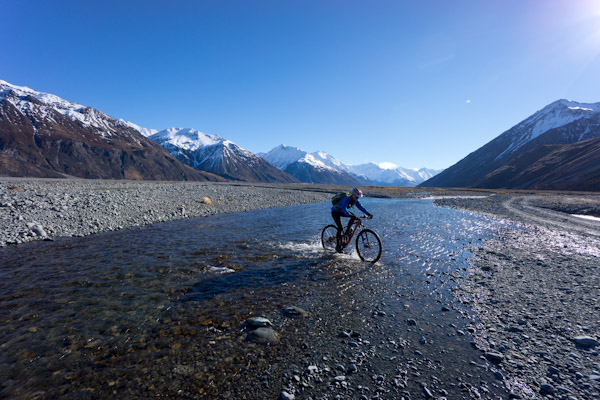 Dave and I do get recognised at times. We’ll be out on a trip and people will say ‘Oh, are you guys the Ground Effect guys?’ – from the photos, I guess. And I go ‘Yes, he’s the photographer.’ “

“One funny thing that somebody asked me – she said, ‘Have you done all the rides in that book?’ So yes, I have done all the rides in both of Dave’s books. (For the record, that’s 75 backcountry trips, totalling some 3670 kays, with around 64,601 metres of elevation, assuming Ditte did every ride just once.)

I reckon people in New Zealand don’t utilise the backcountry. I guess they find it too hard to organise or do, or don’t know how. A few people have given some good feedback on the books, where they’ve read about these so-called missions and they’ve gone and done them. So Dave’s books have made it a bit easier for people to go and do it. But we hardly see anybody when we are out there – get out of the bike parks and ride backcountry. 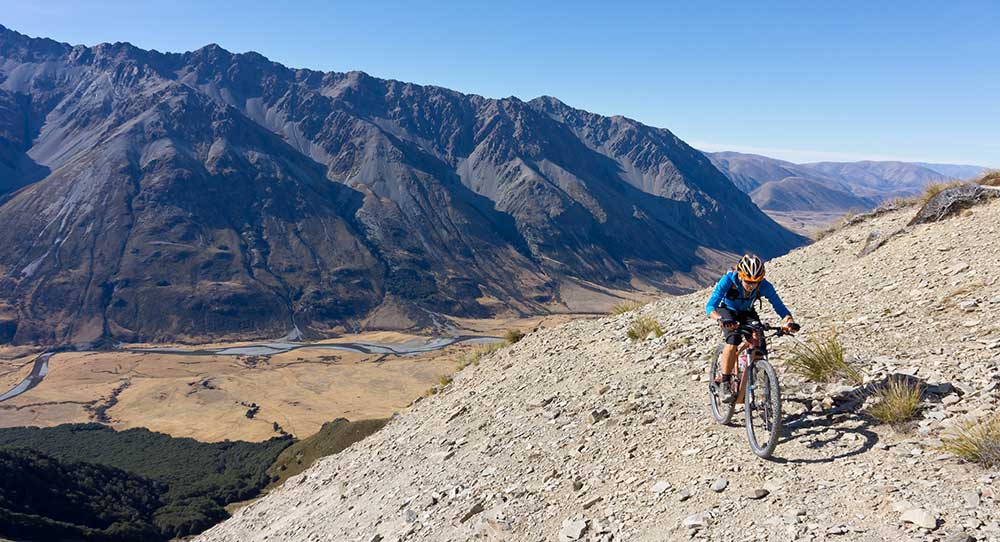 Most rides are on Department of Conservation (DOC) land, so there is hardly anywhere that you need permission. Most of it is all ‘Oh, just go and do it’. There are lots of Conservation areas that have just sort of gone over into DOC hands. So read up and go and do it. That’s what we do, you know. We just get a map and read up and think ‘Oh, that would be cool to do,’ and then maybe check with DOC and see if we can, and then we just go and do it.”

For more of New Zealand back country, check out Flow’s Going Wild feature, or track yourself down a copy of Dave Mitchell’s Mountain Biking South and Mountain Biking North.