Frank Stacy’s life is an exercise in traction. A tyre engineer and designer, Frank has spent years defining that perfect balance we take for granted when we roll our treads out onto the dirt. During his recent visit to the Antipodes, Frank took some time out from field-testing to explain to us the challenges, processes and black arts of tyre design and construction. Here’s what he had to say.

The evolution of a tyre designer

I grew up in the motorcycle industry. My family owned a motorcycle dealership near Buffalo, New York and we all practised and raced together. Dad had an amazing work ethic and he was a top local racer. He taught me so much about the business, about motorcycle mechanics and how the smallest of changes to the bike, such as tyre pressure, tread pattern or suspension can add up to big gains on the race track. I’ve never forgotten this and I continue to emphasise this to the young riders I work with today: Pay attention to the little things. Small differences, they add up in the end.

I raced motorcycles as a professional from age 18 to 28 when, in 1981, Dunlop Tire Corp hired me as their lead test rider. They sent me around the world to work with incredible groups of tyre engineers and test riders to learn the art of tread design, casing structure, rubber compounding, tyre manufacturing and tyre testing.

In early 1995 my wife Carol and I started our own company, Stacy Testing and Tire Specialist Inc. Later that year Specialized Bicycle Components approached me about designing and developing its complete tyre line for the US and the world. I worked with Specialized until June 2010 – after 15 years, I was eager to grow and focus on the latest technology and innovation in the bicycle tyre industry. I received a call from the tyre management team at Trek Bontrager. I met with them and after one meeting they had convinced me they were eager to improve, and that they would provide the backing needed to build the Bontrager tyre line to be a leading brand. So in July 2010 I signed on to be Bontrager’s director of Tire and Rubber Technology.

My hands-on experience in motorcycles has given me an advantage in what I bring to the bicycle tyre industry. I’ve always felt that off-road motorcycle tyres have a lot of cross-over to mountain bike tyres. For example, the tread pattern ‘land-to-sea’ ratio, the casing structure and the rubber compound are all key points. Where there is a big difference is weight and rolling resistance. These two areas are low priority on a motorcycle tyre because a motorbike has power to spare, but with bicycles it’s very different. Also, pinch flats on motorcycle tyres are almost non-existent, but they’re a huge factor for mountain bike tyres.

On working with Bontrager

Working with Bontrager now on its tyre program has been a very positive experience and I feel like we’ve made some great changes. The thing that surprised me the most when I came to Bontrager was that some of its factory mountain bike race teams were racing on other brands of tyres. This blew me away. First on my list was to prove to those teams that with their help and the right people behind the tyre program, we can make winning tyres. After one year of designing treads, casing structures and compounds, and tons of work, we now have all the factory mountain bike teams, and several support teams all using Bontrager tyres. We enjoyed huge success over the past two years in cross country, enduro and downhill. Seeing Aaron Gwin on the podium at the Downhill World Cups, arguably the best proving ground for mountain bike tyres, was definitely a good feeling. 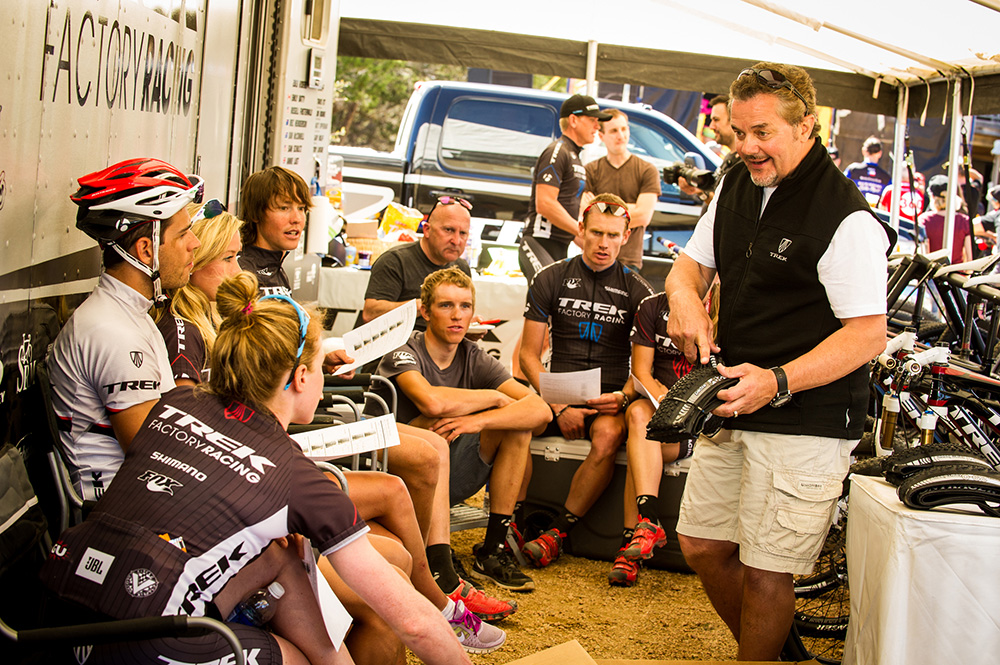 Proving the product at the highest levels is our top priority at Trek Bontrager. I’ve always been a believer in field-testing, and to me, results at the top tier of racing are a true indicator of tyre performance.

Having said that, there’s a huge development process that leads to a tyre being raced on that kind of stage, a mixture of both lab testing and rider feedback. I’ve always believed you have to understand the tyre’s intended application before you even begin. For example, for cross country, fast rolling and lightweight are a priority, traction a close second, with handling and wear in third. For downhill tyres, traction is way out front in priority, handling is second, weight is third and wear is a distant fourth. Once you have your priorities, you can begin to decide what the tread should look like and what materials are used for casing and compound spec. 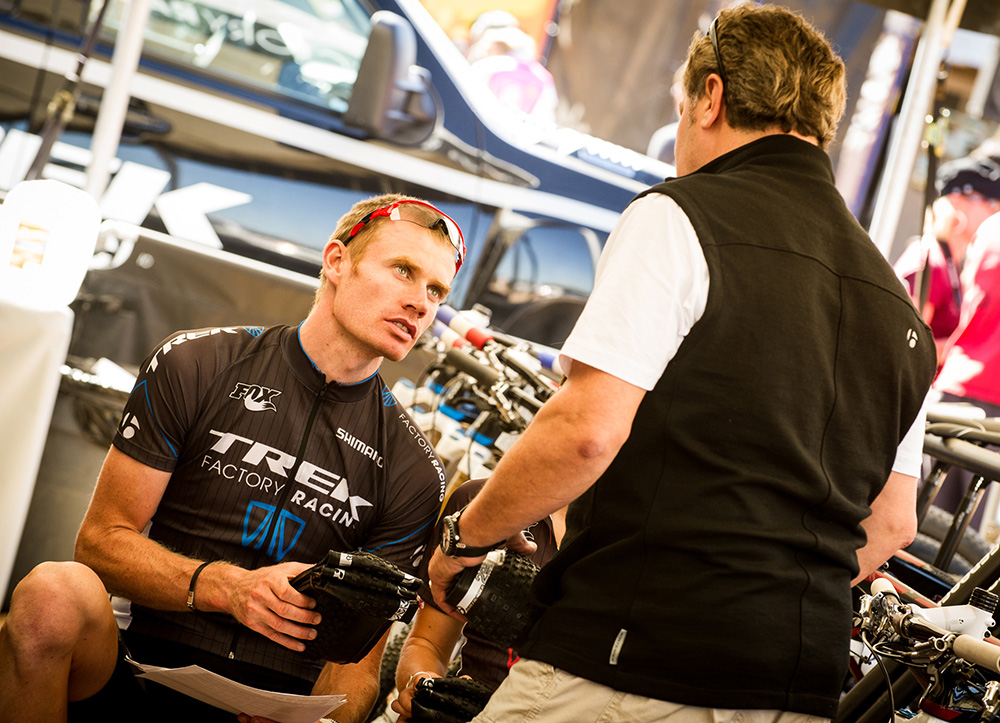 Designing rubber compounding is an art. There are four main properties in rubber compounds: polymer (rubber can be natural, synthetic or a mixture of both), carbon black (which affects the tyre’s durability, hardness and traction level, and makes the rubber black), oils (which alters traction and hardness) and fillers (basically to protect against cracking, ozone and those types of things). I’m not a chemist but I have many years of designing the basic formula for rubber compounds to learn which part of the formula affects what. I determine the basic formula by analysing competitors’ compounds through field-testing and laboratory research. Across the Bontrager tyre range we use around eight different compounds, some of which are proprietary to Trek Bontrager.

In terms of the actual testing, we focus on four main elements in the lab: rolling resistance, puncture and cut resistance, compound analysis and wet/dry traction. For some of our lab testing we engage a third party, based in Finland, too. The testing in the field is where my passion lies – I’m very hands-on with my testing programs. I monitor everything from the fitting of the tyres to tyre pressures, and I watch the tyres with my own eyes, on various areas of the course, and I collect data from the riders firsthand. 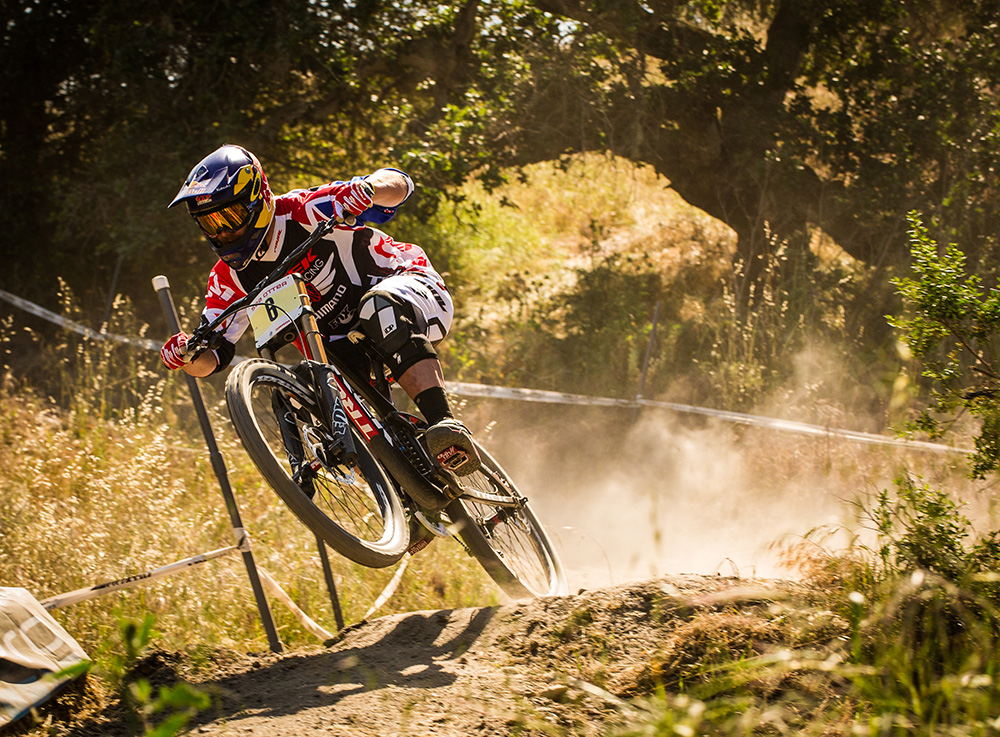 The first thing I tell the test riders is, go out and learn your lines and set the bike up how you want it. Once you’ve done this, the only change we’ll make is to the tyres under you. Be consistent with each set of tyres: hit the same lines and do your best to carry the same amount of speed everywhere. If you mess up, throw that lap away and start over. I don’t need lap records, it’s most important to be consistent and pay attention to the small differences.

I’ve worked with several of the best riders in the world, motorcycle and bicycle. I’ve learned that just because someone can go fast doesn’t mean they will be a good test rider. It takes a certain feel to be a good test rider, and only a small percentage of racers have it. Over time it’s rewarding to see their education in tyre-testing develop and grow, and to ultimately choose the right tyre for the right conditions to race and win.

My wife Carol comes along to the tyre tests and takes photos. That gives us the ability to review the terrain and the surfaces after the test, and to compare with other tests we’ve completed. Additionally, Carol’s photos go with my test reports so the Trek staff can get a better visual of our test without being there. 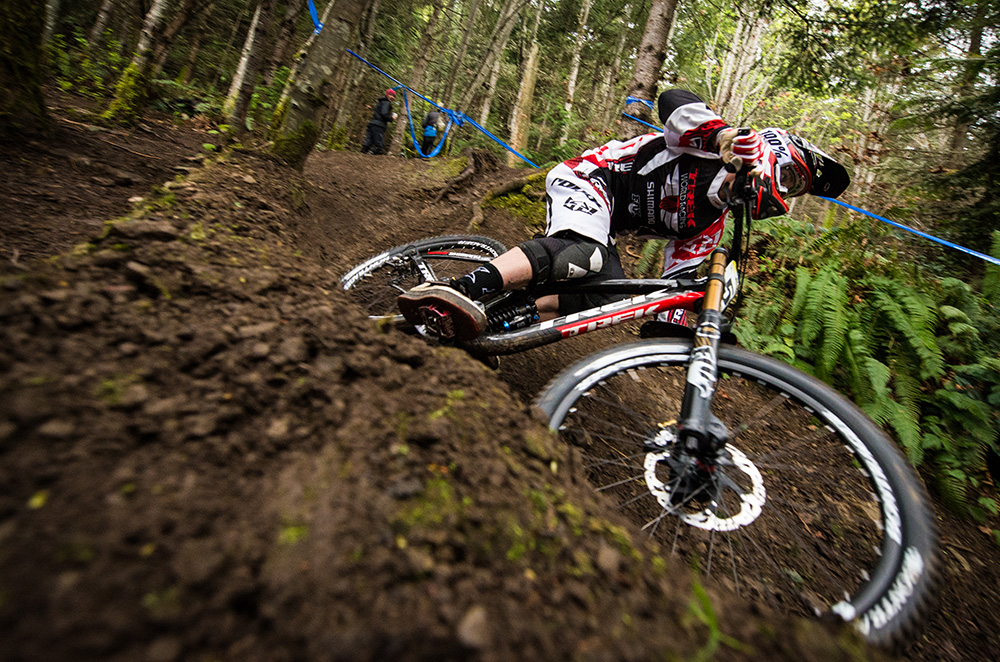 It’s undeniable that tyres have come a long way in the past 15 or so years. Just take a look at tubeless-ready technology for an example. Tubeless didn’t start out so good because too many companies rushed it to market before they understand the application. Now, however, even the weekend rider can set his or her tyres up tubeless and enjoy the benefits. Having said that, tubeless technology for downhill is one area where there’s room for considerable improvement. There are a few top brands testing downhill tubeless and this drives technology, but it’s not going to be nearly as easy as it was for cross country, trail or even road tubeless. Motocross tyres are still tube type – I worked on a motocross tubeless project for Dunlop Tires back in the mid 80s. Even though we won races with it, it had too many teething problems so it never went to production. But I’m pretty confident that, with Trek Bontrager design, technology and resources, we’re going to get it right, so stay tuned.

I’ve always said if you’re in it to be the best, you never down tools with design, development or testing – we’ve just scratched the surface of where tyres can go. I’m constantly searching for the next generation rubber compound, casing material and tread design… There’s always lots more to do!