We booked a late return ticket from the Hellfire Cup in order to pack in some extra mountain bike tourism while we were in town. The North-South Track was first on our list.

When a trail is a really good one, you’ll know it’s name before you even know where it starts. Hobart’s North-South Track is one of these masterpieces. A ten kilometre (mostly) descent that takes riders from a signposted car park at The Springs, half way up Mt Wellington, down to Glenorchy Mountain Bike Park.

This is a track that is purpose built but has nothing to do with racing. It’s genius lies in its ability to thrill riders of all types, a carefully crafted journey with a landscape that changes dramatically along the way.

Our partner for this ride was Simon Townsend, a bushwalking guide in a past life who knows the Tasmanian bush like the back of his hand. The pannier racks on the back of his bike give him away as the father of a bubbling two year old and someone who is refreshingly unconsumed by new bike technology.

We couldn’t have asked for a more local, Tuesday afternoon experience. This is a track where you simply come to enjoy the riding and relax. 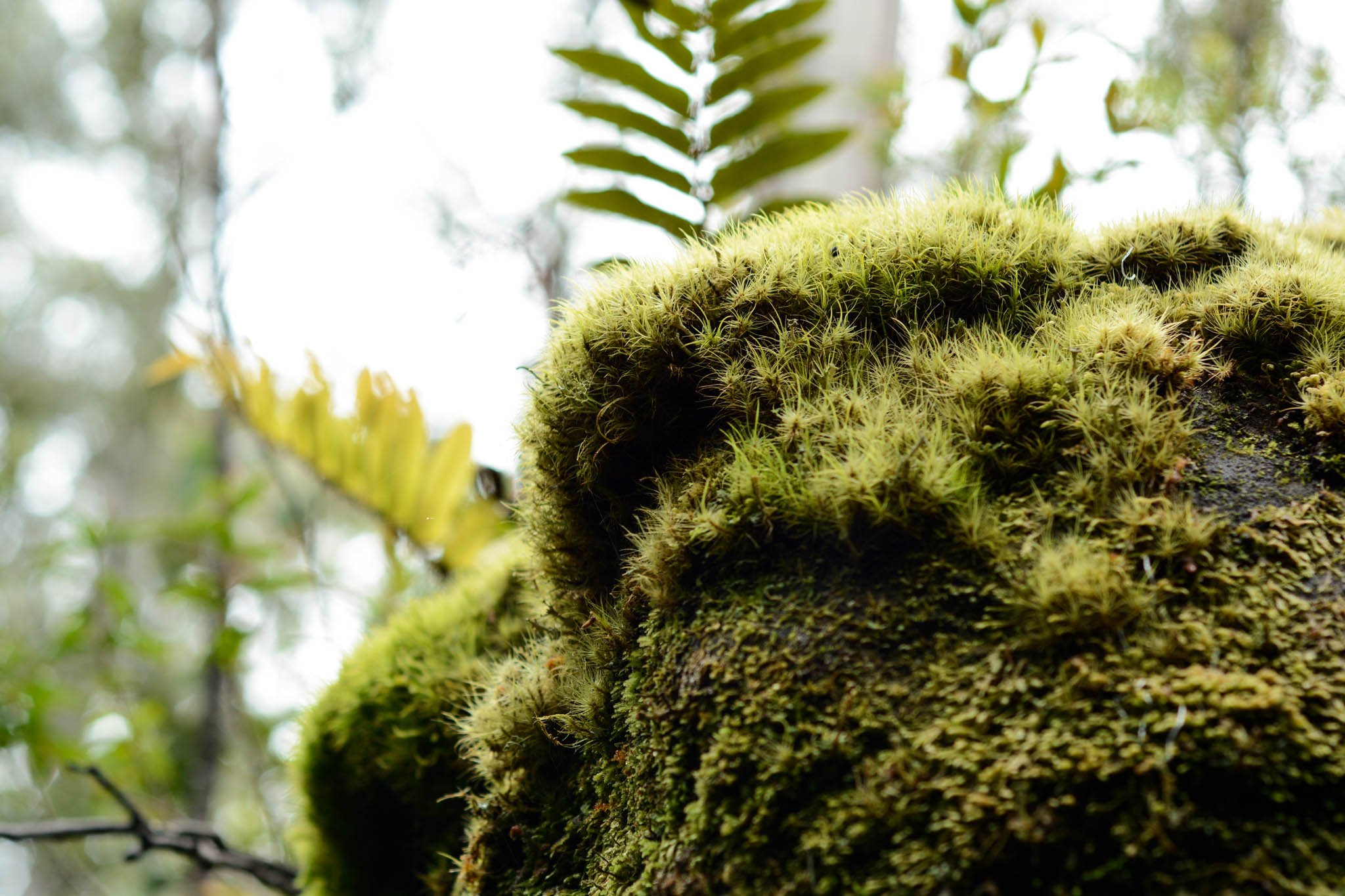 Starting in rainforest with thick moss on both sides of the trail it’s hard to decide whether to take in the scenery or focus firmly ahead, pumping the surface for thrills and speed.

All of a sudden, the wide, hard packed singletrack catapults riders into an enormous rock-scape. An oversized scree slope created by a glacial melt, frozen by time, covers the hillside to the left. While not an uncommon sight in Tassie, it’s not something you’ll see on the mainland. 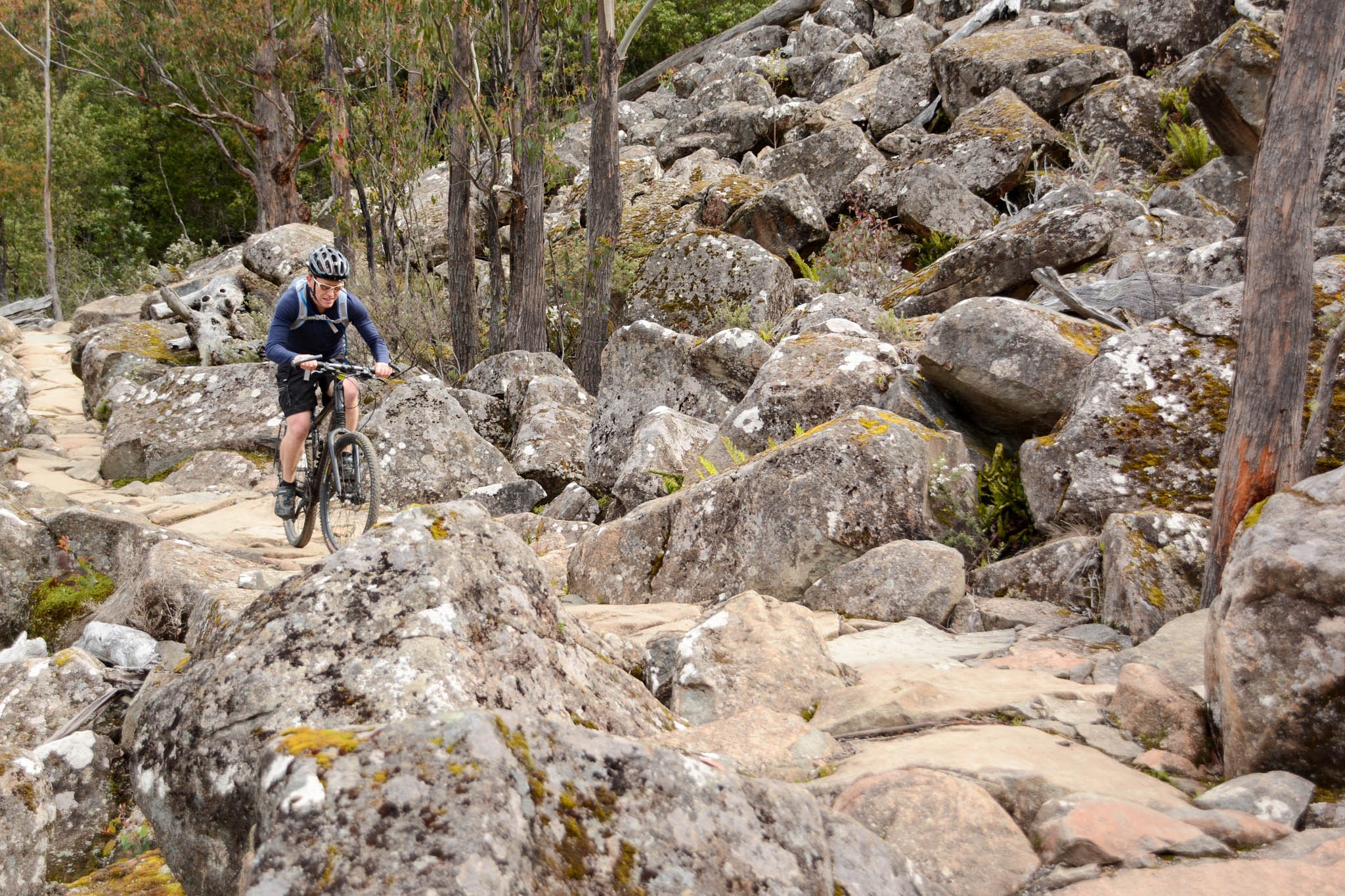 A paved rocky trail shoots you past moss-covered boulders to more closed in bushland. Cast your head right for a quick view of the city.

If we could ride a trail like this regularly, we’d shoot through here yelling, screaming and holding our speed. Not sure when we’d see such a dramatic landscape again, we had to get off our bikes to take it all in. 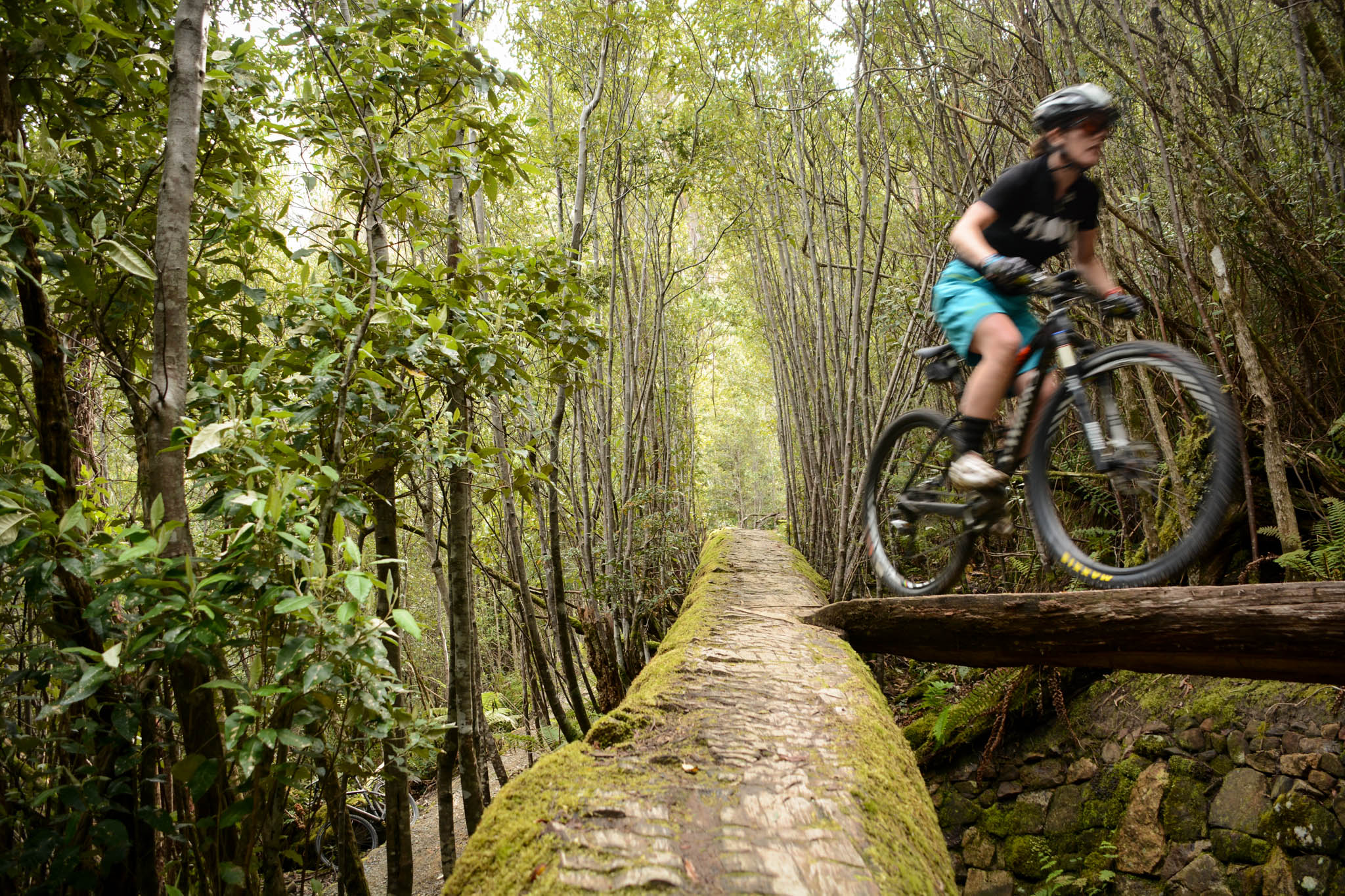 It was here that were blown away with how many locals we met enjoying the trail as part of their day. The sun was out after a wet couple of months and the quick draining trails were almost dry. It was such a lift to see so many people outside on bikes making the most of the afternoon. A few lycra-clad warriors were riding in the South-North direction but they were less keen to stop and chat. 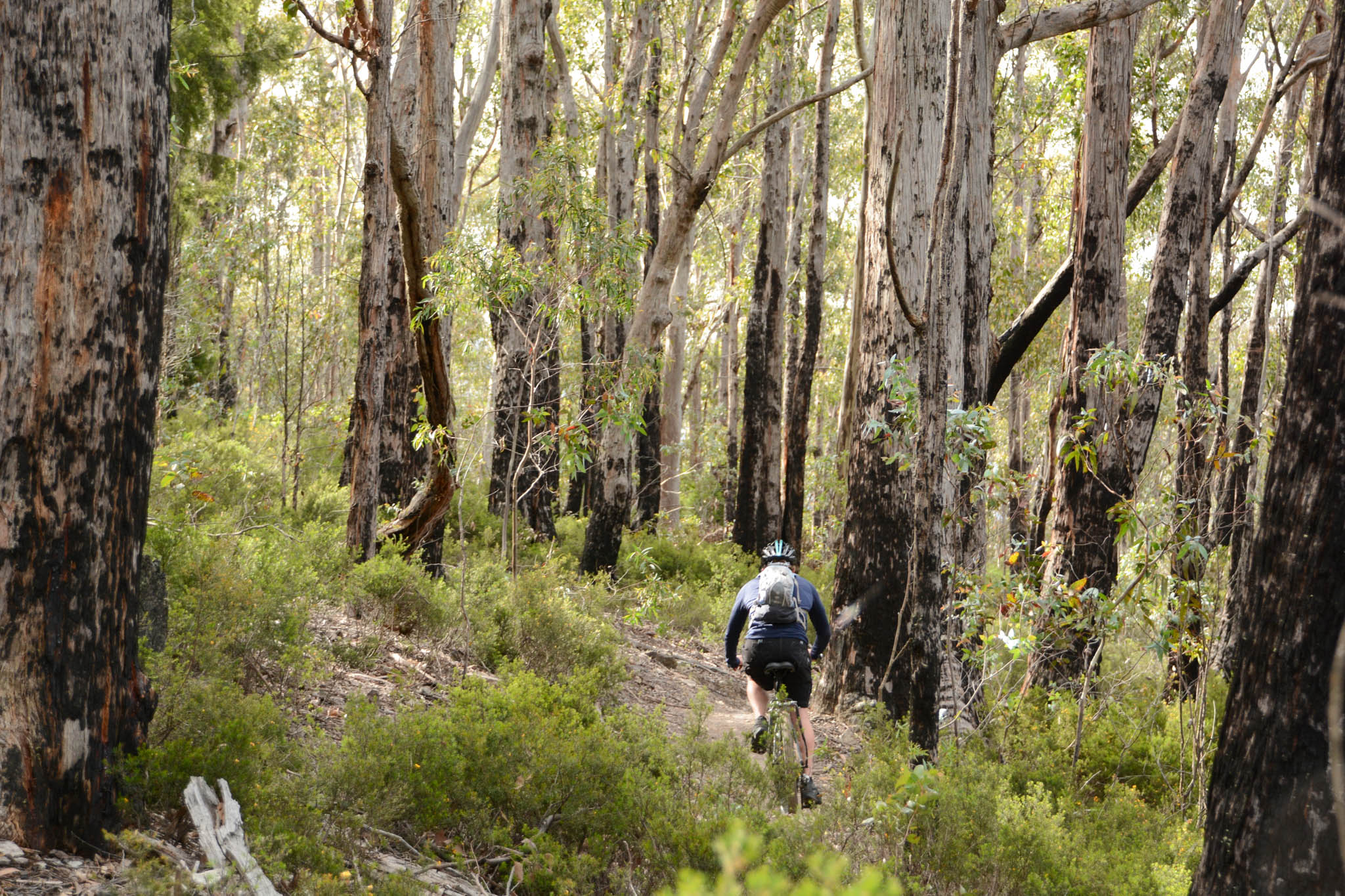 The half way point, time wise (the first section of the trail has some climbing), is marked by a cabin where you can take a moment to sit and refill your bottle. You can give your arms a rest if you’ve been clenching the bars too tight or are out of practice riding sustained singletrack descents.

The other side of Junction Cabin was built later on in the project under contract by many skilled trail workers. This included Dave Mason from Mountain Trails who built a lot of the singletrack for the Hellfire Cup. The Eucalypt bush is drier here and the grainy singletrack heads almost completely downhill.

It was here that I could feel my calves start to twinge from spending so long standing on the pedals, the only indicator of how long we’d been riding. Time felt frozen for the rest of the experience on the trail.

We started to cross over fire trails and other paths that signalled possibilities for extending the ride into a longer or different loop. We snaked our way left down big, grainy berms all the way to the Glenorchy Mountain Bike Park. 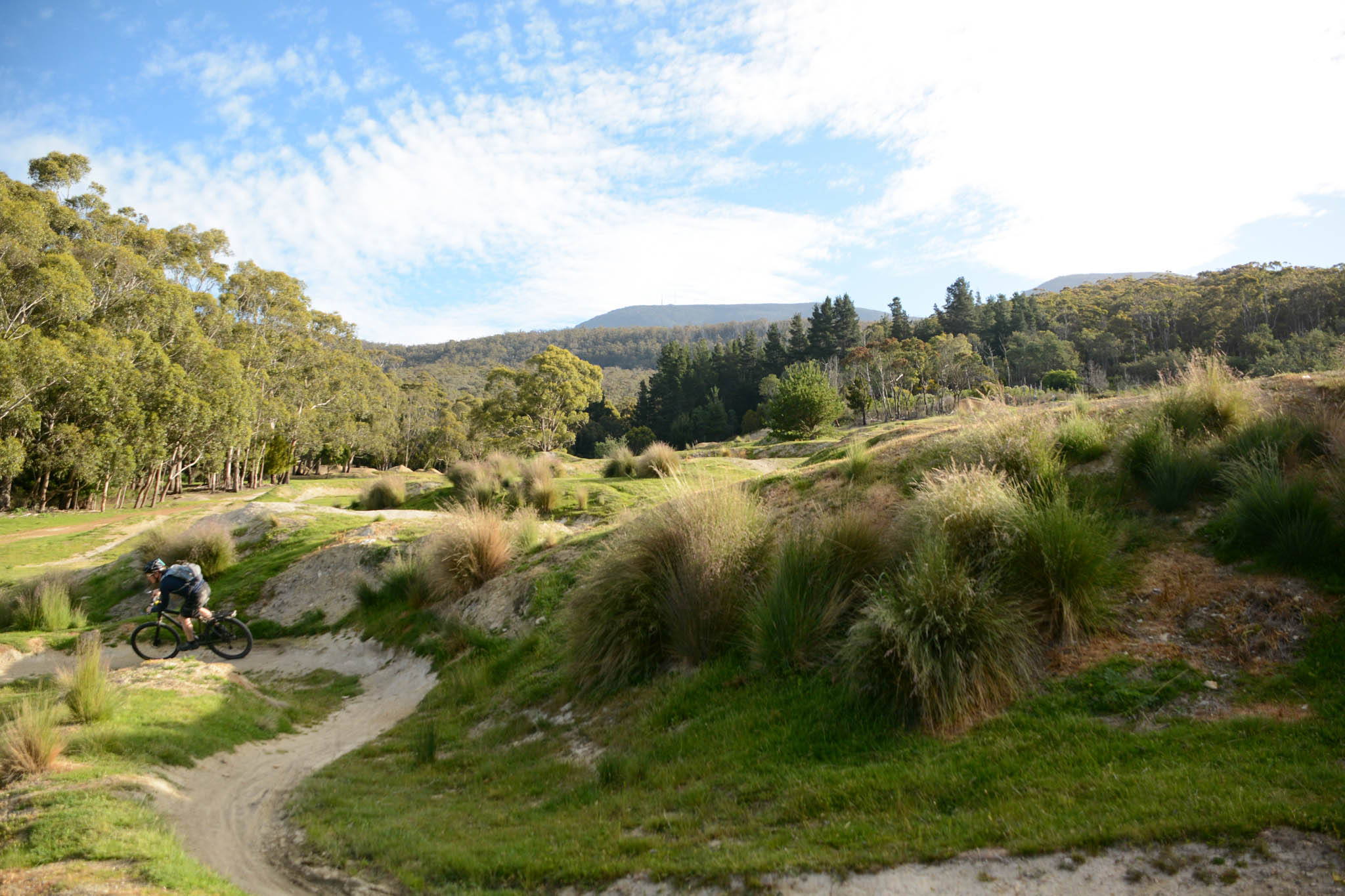 Despite the high profile races that have taken place here, the park was almost a let down in comparison to the journey we’d just been on. The rutted trails and weedy landscape a stark contrast to the impeccably maintained singletrack we’d traversed for the last 10 kilometres.

In contrast to the social experience of the North-South Track, there wasn’t a person in sight save a couple of dirt jumpers enjoying the sinking afternoon sun.

What blew us away most about this journey is that this is a trail that brings riders of all types to jump on their bike and experience a place. You can loop it up on your own, or get dropped off at the start and collected again down the bottom.

A lot of money and infrastructure is being invested into mountain biking throughout the country for economic growth, primarily through tourism, in regional towns.  The North-South Track certainly attracts a lot of holidaymakers to experience its thrills. 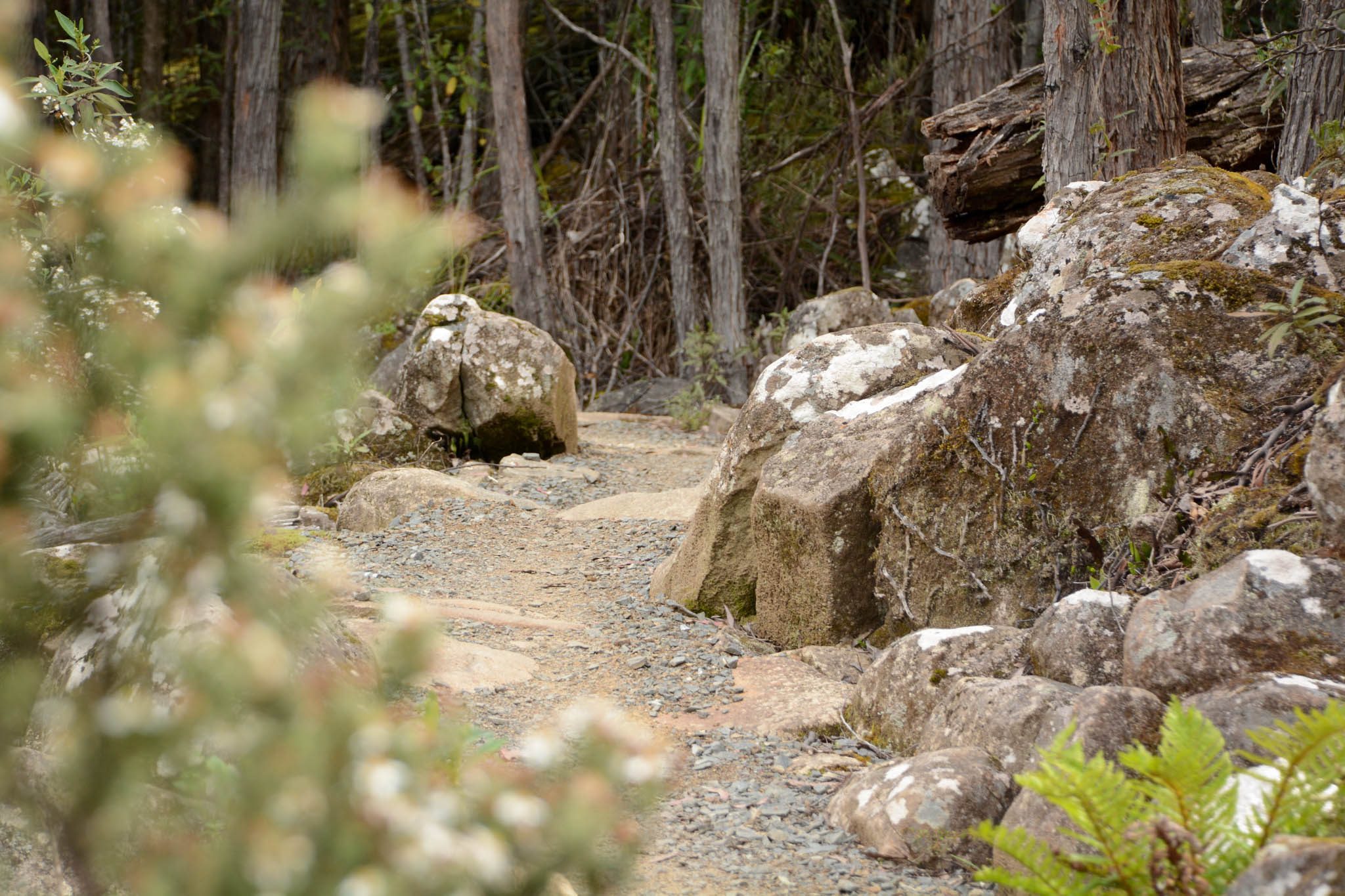 But perhaps even better than that, and what struck us most about the North-South Track, is that it adds so much quality of life experienced in a capital city. Imagine if a trail like this was around the corner from your place.