In its second year, Crankworx Rotorua put on a mighty show of awesome gravity racing with so many huge events on the doorstep of some of the world’s finest riding. Here’s how it went down.

A KIWI AND A QUEEN WIN BIG AT CRANKWORX ROTORUA ON DAY ONE.

Young gun Matt Walker and 2015 Queen of Crankworx the first winners of the five-day festival.

Fast trails and a good time vibe left athletes smiling as they pulled in from a pedal-heavy GIANT Toa Enduro at Crankworx Rotorua.

Coming into the event, GIANT rider Josh CARLSON (AUS) was riding strong, but New Zealand’s Matt Walker proved the unexpected victor, seeling the deal on the final stage, after placing eighth the year before and following fellow Kiwi, Carl Jones, in the cumulative standings for much of the race. 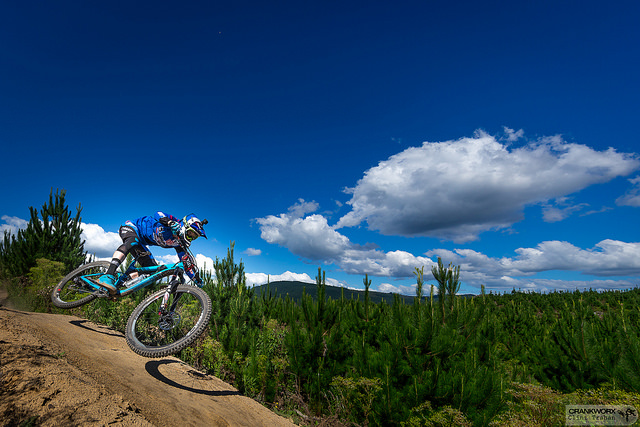 “I was hoping for maybe a top 10 or top five, but to win is a bit of a surprise. I’ve been putting in quite a bit of hard work in the off season now and I guess it’s paying off, so I’m really happy,” said Walker. “It’s been a hard day, quite long tracks and it hasn’t suited my preparation, I guess, but I’m stoked on how today has gone. I’ve been having a lot of fun—it’s good times all round.”

Sharing the limelight, 2015 Queen of Crankworx Anneke BEERTEN (NED), proved her mettle, charging in to win with royal confidence. 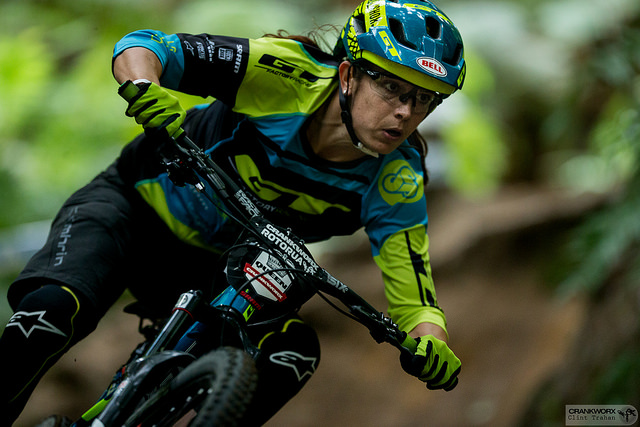 Beerten admitted she is thrilled to have the monkey off her back, so to speak, with a win worthy of her 2015 success right out of the gate. She even dubbed the rough, off-camber trail of K2 easy, saying it was relaxing as it was short, making it less physically taxing for her, though its twists and turns bucked seasoned Kiwis Carl Jones and Brooke MacDonald right off. Overall, the day left her challenged, particularly on Stage 3.

“It was really physical, long, not a lot of flow at the bottom, so you had to work pretty hard,” she said, describing the stage from the finish line. “I thought (the race) was pretty cool… We had enough time between transfers. It was nice, with the whole group of girls we had riding together, the vibe was amazing.” 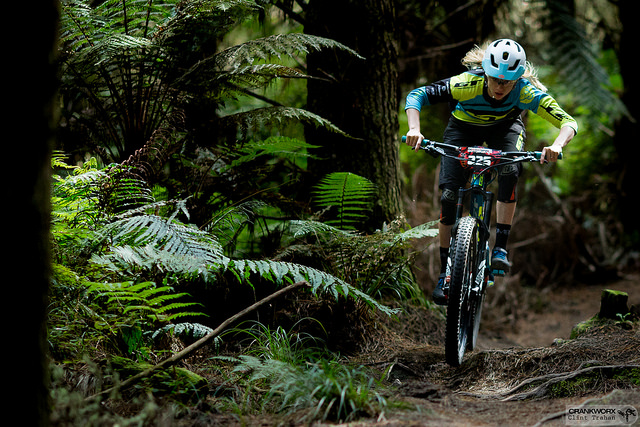 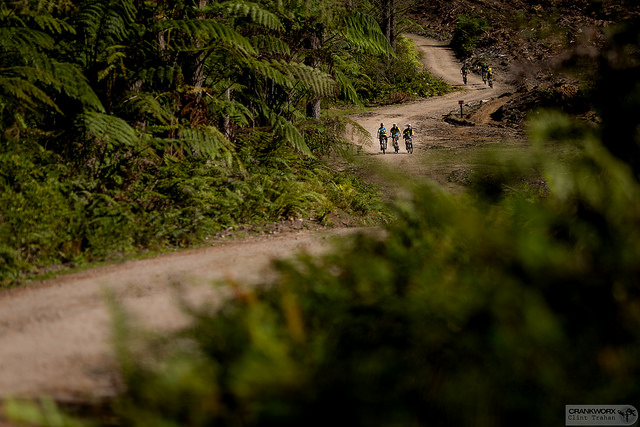 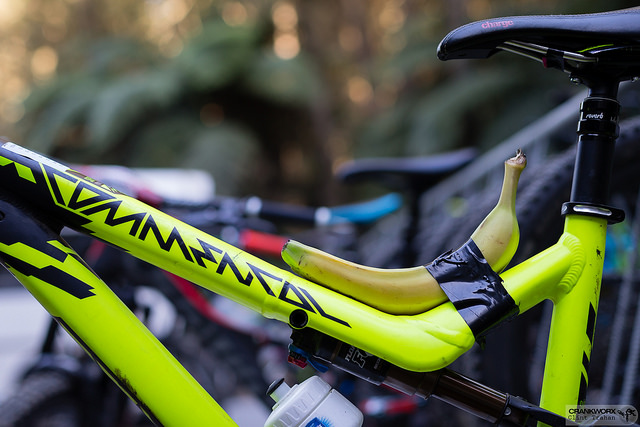 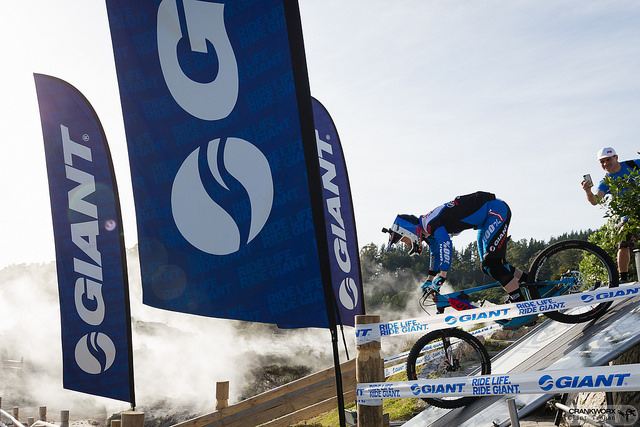 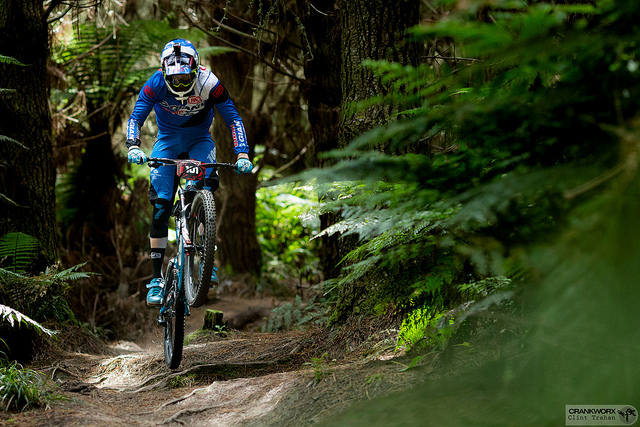 Now an Enduro World Series qualifier, the race attracted a tenacious crowd of New Zealand riders who filled the ranks of the top five nicely with Eddie MASTERS, second, Sam BLENKINSOP, third, and Carl JONES, fifth in the men’s field. Beerten was the sole international rider in the women’s top five.

The Oceania Whip-Off Championships presented by Spank finished out the night on a high note – actually a very similar high to the year before. Ryan “R-Dog” HOWARD (USA) and Casey BROWN (CAN) repeated their wins, despite a monster new whip hit, which could have thrown a wrench in their programs. 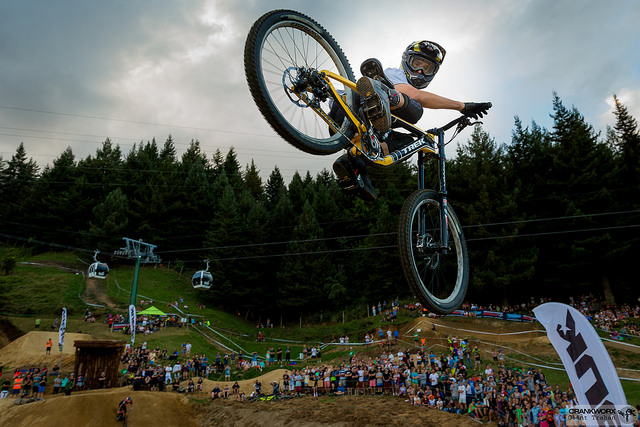 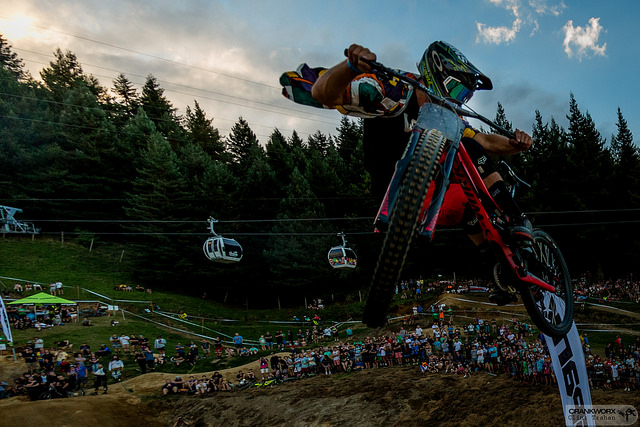 Howard said he figured the number of runs he logged and his double-trouble approach, whipping left and right, likely dialed it in, Brown might have had to step up her game to compete with one of the deepest female fields the event has ever seen were it not for her phenomenal skills. 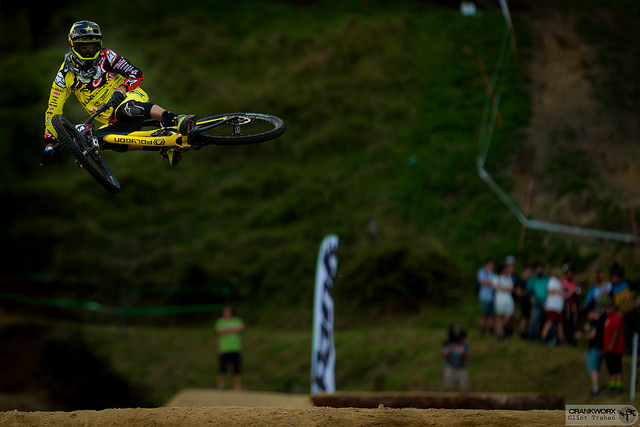 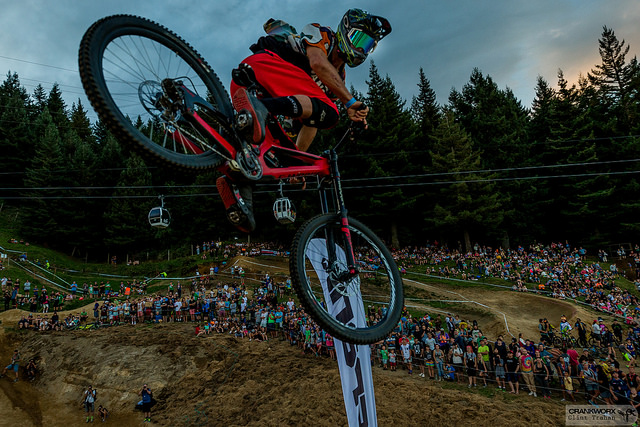 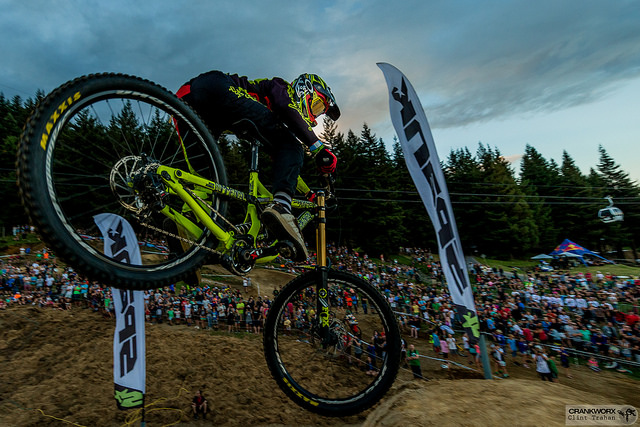 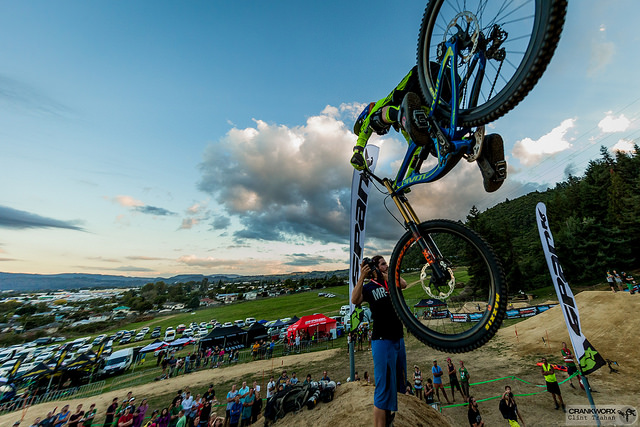 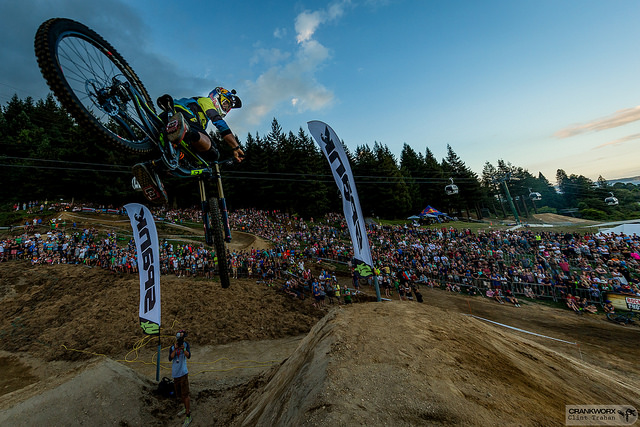 “A lot more women came out this year and we were sending it on this jump. That’s an intimidating jump for anyone. It makes me so excited to see that,” she said.

The original creator of the event, judge Sven Martin, noted the purpose-built jump really pushed the riders and lead to some pretty amazing sideways actions with a big step-up, built for more risk, higher pop, and a sweet berm at the end to skid and spray the spectators.

“Every year it gets crazier and this was maybe the craziest year,” he said, noting R-Dog was considerably more sideways than one usually sees.

FIVE YEARS AWAY AND SLAVIK STILL STEALS THE WIN

The man who wrote the book on Slopestyle penned himself a new first, Saturday, as the inaugural winner of the Kelly McGarry Memorial Trophy at Crankworx Rotorua. 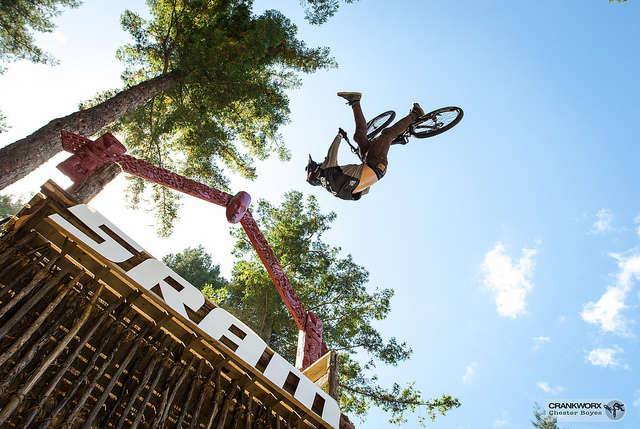 Brandon SEMENUK’s effortless performance bested even Nicholi ROGATKIN’s groundbreaking 1080, dubbed “The Twister”, on an afternoon no one in the bike community will soon forget.

The competition opened with all 18 riders executing a train in honour of rider Kelly McGARRY – a back-to-back run down the course. McGarry was both the designer and builder of the Rotorua Slopestyle course, with Elevate business partner Tom Hey. His passing in early-February, was the only cloud on a stunningly perfect afternoon at Skyline Gravity Park—the weather itself a tribute to the rider known for his golden locks and sunny disposition.

“He was an amazing person and a really good friend of mine. I spent a lot of time with him, rode with him. He was the happiest soul I know,” said Semenuk, who noted the tribute and win were pretty perfect for him as well. 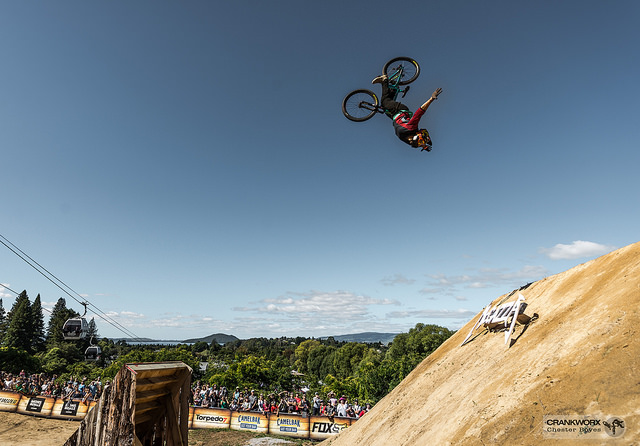 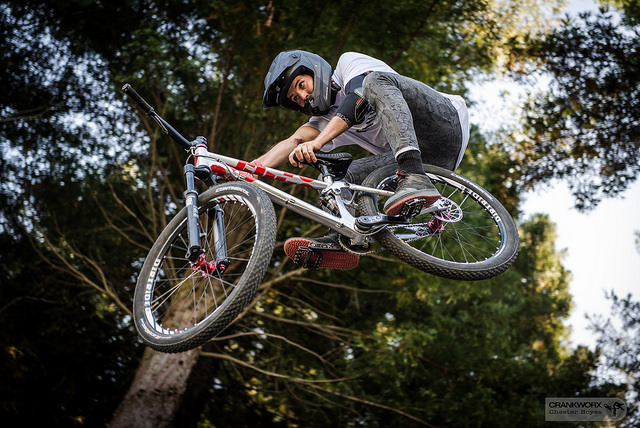 Following a moment of silence, an announcement was made that the competition will be known as the Crankworx Rotorua Slopestyle in Memory of McGazza moving forward, and the riders met the occasion by raising the competition to the highest level. From Semenuk to Rogatkin to the man who challenged the Triple Crown of Slopestyle in 2015, Brett RHEEDER, it appeared everyone was ready to pull out new tricks, pull oppo (opposite) approaches and generally push the envelope.

“I’m so excited to come back and get a good run on the course. The track’s been awesome. Last year, I had a big crash and didn’t get to do my second run, which was a bummer, so it’s nice to be able to come back and walk away unscathed,” said Semenuk.

Social media blew up well before the man known for owning Joyride came through to accept his win, the fans clearly declaring a preference for Rogatkin’s envelope-pushing trick. In interview after the competition, the riders indicated it was Semenuk’s consistency and grace, which secured the win over the phenomenal single hit. 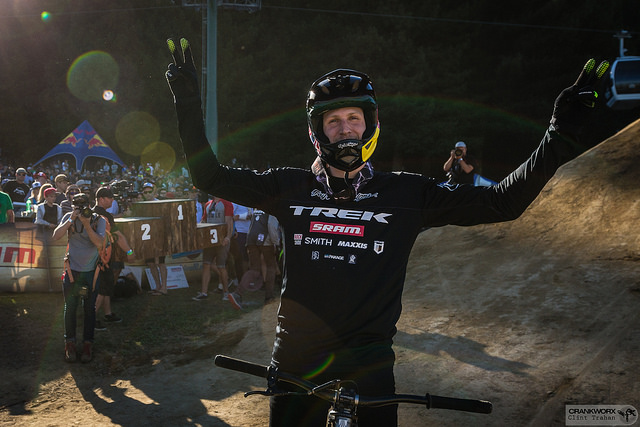 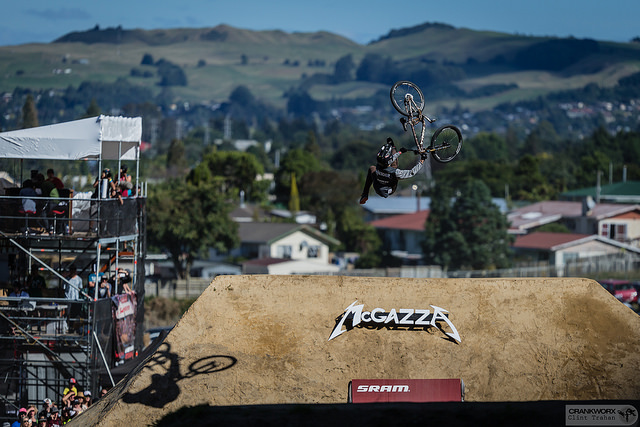 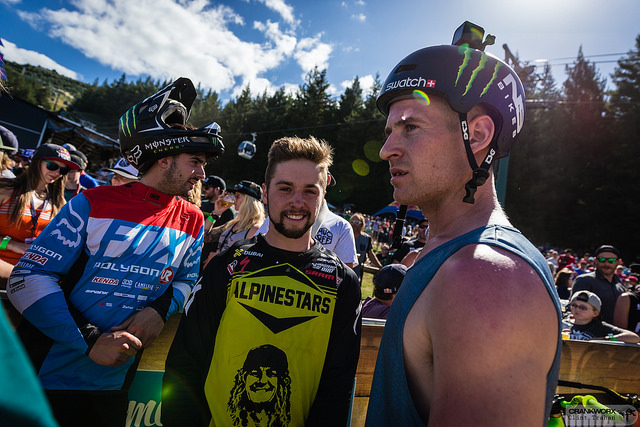 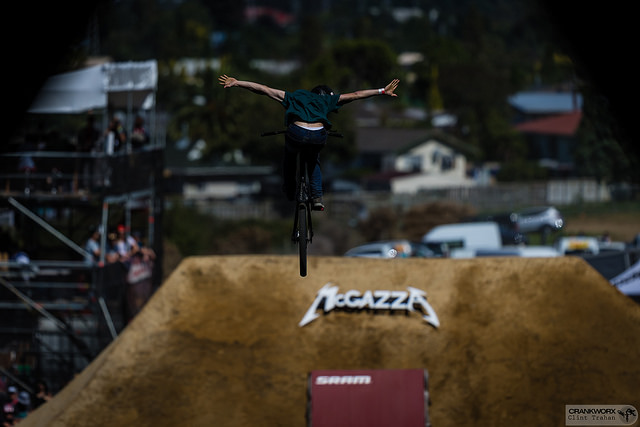 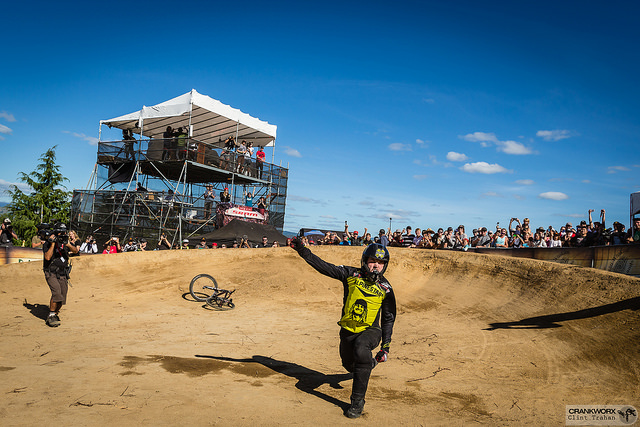 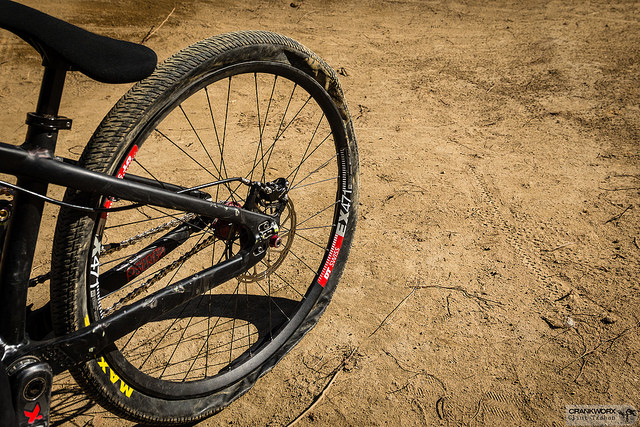 “Between those two runs, one guy had absolutely perfect execution, but one had some trick difficulty—being Rogatkin—with a little inconsistency. Tough, tough fight between the judges, between first and second, but once it came down to it, trick for trick, it was Semenuk,” said Paul Rak, head judge. 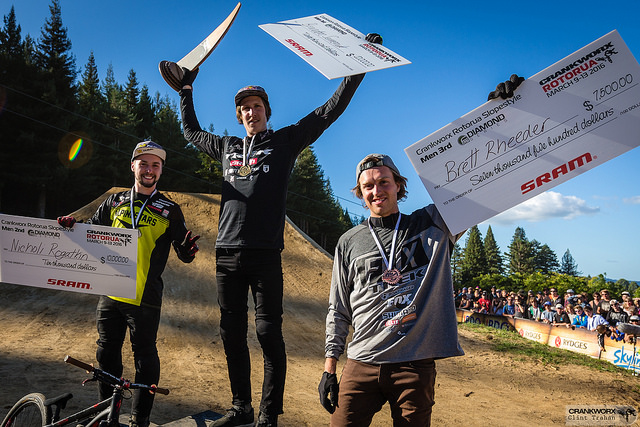 “…It feels insane to be the first to do (The Twister) in the contest and to have the support of the crowd and the guys… feels amazing,” he said.

The Slopestyle event is to be followed by entertainment from DJ Nero and PDiggs and the Deep Summer Rotorua Photo Challenge. Deep Summer challenges the industry’s best photographers to assemble a team of riders to build the most creative photography slideshow possible. The shows will be assembled by competitors Zach FAULKNER (USA), Callum WOOD (GBR), Simeon PATIENCE (NZL) and Sean LEE (AUS).

Matt Walker finished Crankworx Rotorua in the lead for King of Crankworx, Kintner comes on strong for Queen

The victor during the inaugural Crankworx Rotorua downhill last year, Bruni managed two of the Crankworx DH wins in 2015. Standing on the sidelines following his race, he looked at a packed crowd and noted he was thrilled the fans returned for the final day of the festival, after a huge crowd took in the memorial for Kelly McGarry, Slopestyle event and the Deep Summer Rotorua Photo Challenge Saturday. 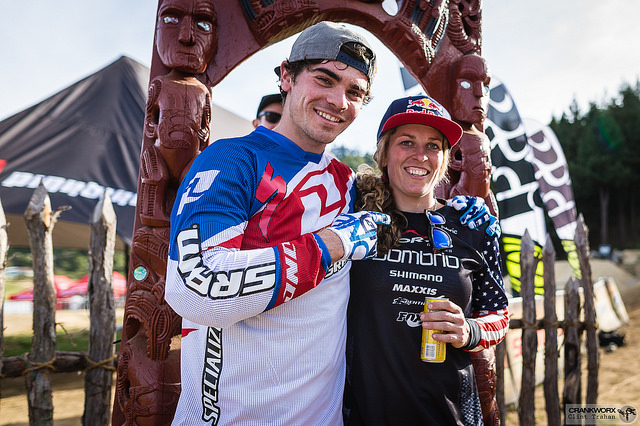 “I feel good. I changed bikes, which is a big change. I’ve been working a lot and training again. Starting a season with a good feeling is a good way to start,” said Bruni. “I’m definitely starting to like New Zealand and the day has been pretty good.”

Sitting in first spot for the women, Jill KINTNER (USA) was out to build better memories in Rotorua, after a challenging 2015 where she caught a tire in a gate on the pump track to place second, and injured herself on the downhill course in practice. 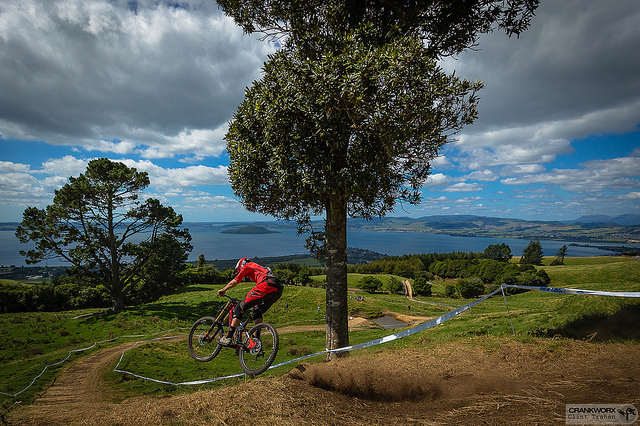 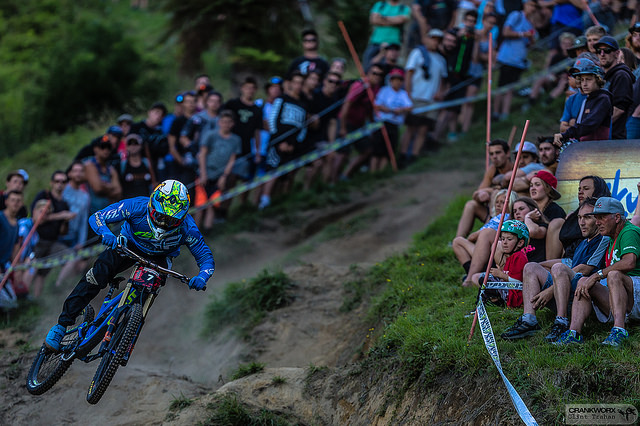 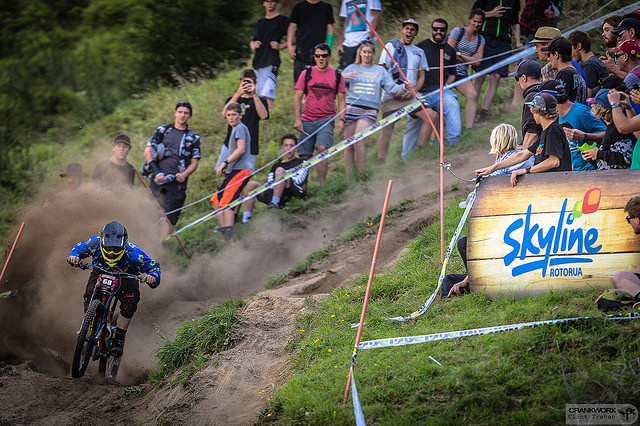 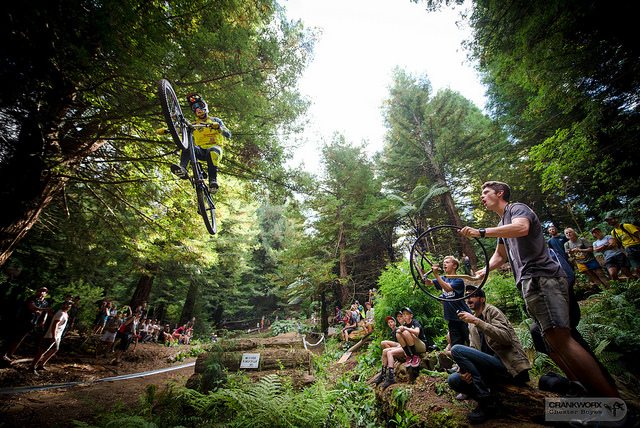 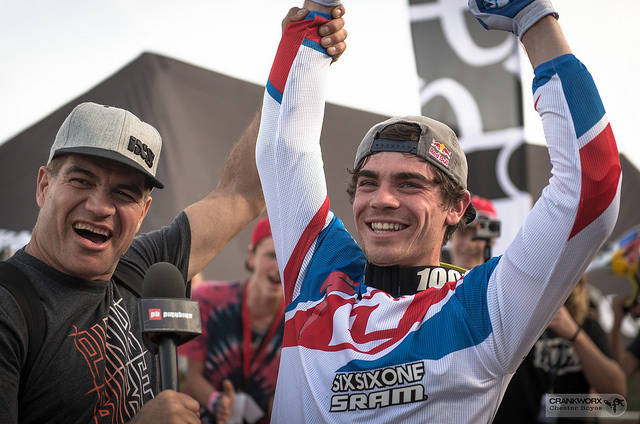 “That one was a little bit unexpected, actually, so it feels a lot more fulfilling than any (of the) other wins,” she said, after pulling into top spot.. “Downhill wins – that’s like something special for me, especially with Tracey, Casey and Emilie, such good quality chicks, to compete against, and such a big stage and live feed.

“…This whole event was no joke, too. You just look at the whip jump. There’s a lot of demons you have to conquer here. And, plus, I had to go down that section where I got hurt and I had to work it out, so I’m proud of myself for overcoming a lot of things and doing new things, and massive jumps, and coming out on top. So this one means a lot to me.”

She beat out Tracey HANNAH (AUS) and Casey BROWN (CAN), and added a third first place win to her docket for the festival. She moves into a strong position at the top of the Queen of Crankworx standings, while Kiwi rider Matt WALKER (NZL) has the lead, by 75 points, in the King of Crankworx standings.

Like Kintner, Walker is very clear he’s trying to pack in as many events this season to target the crown as possible.

“It was a pretty big goal of mine coming in. Last year I gave it a nudge, but it was just too hard trying to juggle getting bikes, and getting used to bikes. Now I’ve got the proper support this year, and so I’m getting used to my bikes and really working hard toward that overall,” said Walker.

The Crankworx Rotorua action wrapped up following the downhill event, with the next festival slated to roll out from June 15–19. It will be the beginning of a new chapter for the Crankworx World Tour as it launches the inaugural Crankworx Les Gets, bringing the festival to Portes du Soleil region of the French Alps.

Anointed by dirt, powered by passion, the Crankworx World Tour travels to Rotorua, New Zealand, Les Gets, France and culminates in its Canadian home base of Whistler, B.C.

Tread among the gravity-fed. Join the bike-minded.