Suspension curve still needs tuning
Needs hard riding to make the most of it.

It’d be hard to find a brand or genre of mountain bikes that we haven’t ridden here at Flow. This one, on the other hand, is as unique as a vegetarian dog, a real one-off, a prototype. Handmade in a home garage in Adelaide, this wild and unique contraption of a bike deserves a nod of respect, and the man behind this concept deserves a beer.

Flow was fortunate to have the P3 in our possession for a couple weeks, riding it was fun, but what we loved the most about it was the way it made us really think. 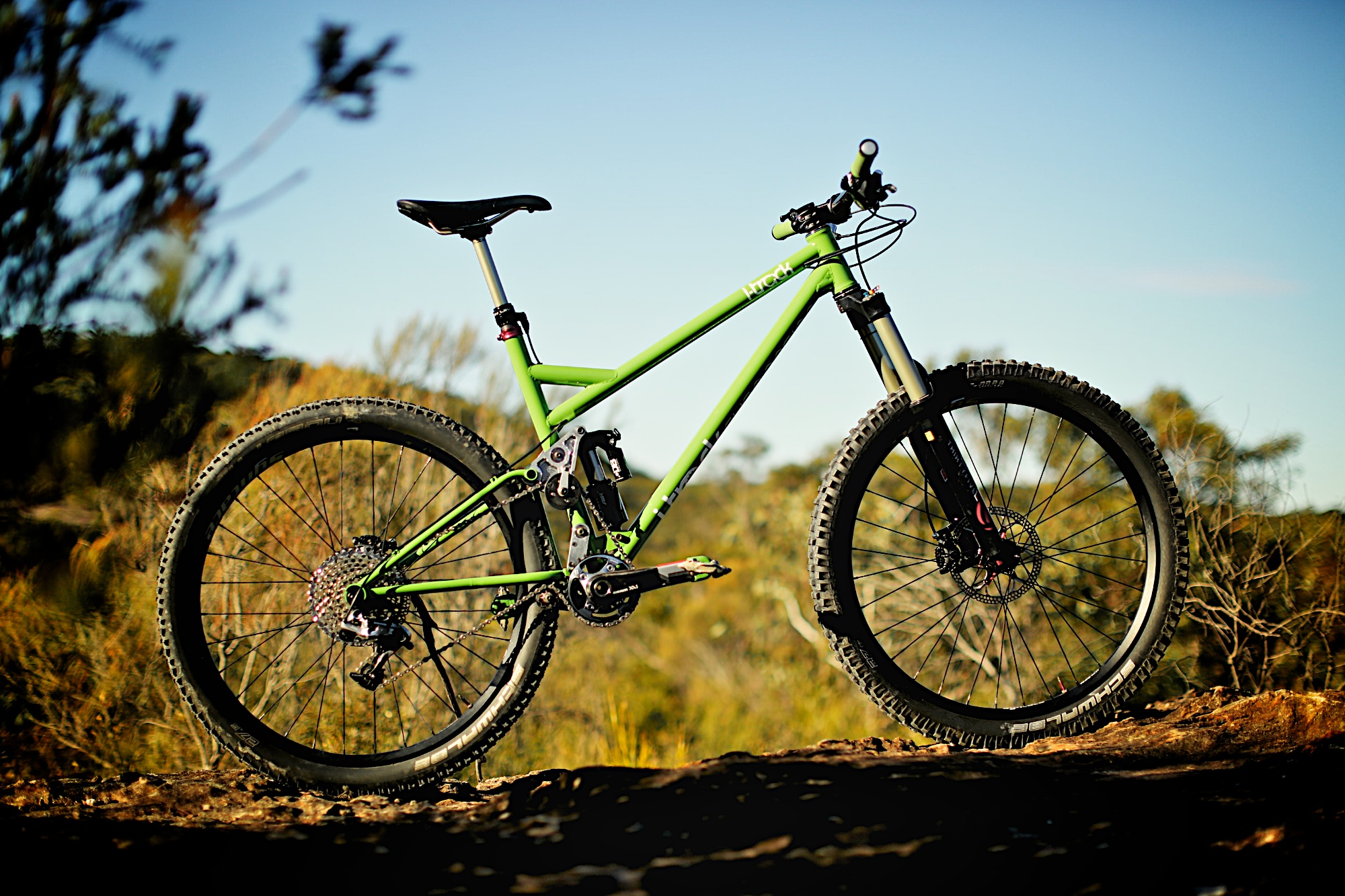 The iTrack P3 All-Mountain we received at Flow is currently the only one in existence, ridden by the frame builder Hugh Mcleay himself. In the name of development, Hugh eagerly awaits feedback and opinions from anyone who rides it, every point is taken on board to add to the development of the next prototype. Derived from two earlier downhill bike prototypes, the recent availability of single ring drivetrains has allowed this concept to be applied to all-mountain bikes, like this guy.

Wow, where do we start? Apart from being a chromoly steel frame, there are also obvious differences between the iTrack and your common mountain bike. The P3′s suspension system is centred around a four-bar linkage configuration with a rearward travelling rear axle, which isn’t that unique, just that it moves rearwards significantly more than most. But where the P3 really differs from similar ‘short-link’ four bar designs is the incorporation of an idler pulley.

We’ve seen pulleys used in mountain bikes before, with varying amounts of success. For example Redalp, a Swiss brand who use a similar frame design in their bikes, but fall far behind in looks, oh dear… In most other systems that use an idler, the pulley is typically static and is used as a way to reduce pedal kickback caused by dramatically rearward axle paths. But in the case of the P3 the idler moves moves upwards and rearwards as the suspension compresses, which allows the rate of chain growth, and therefore anti-squat, to be tuned throughout the suspension range.

As we mentioned in our first impression piece on the bike before testing, the main aim of all this is to create a bike that has a) has a rearward axle path for exceptional bump-eating b) doesn’t rely on excessive low-speed compression damping for pedalling efficiency c) doesn’t suffer from too much pedal feedback d) has an anti-squat profile that is variable throughout the suspension travel. 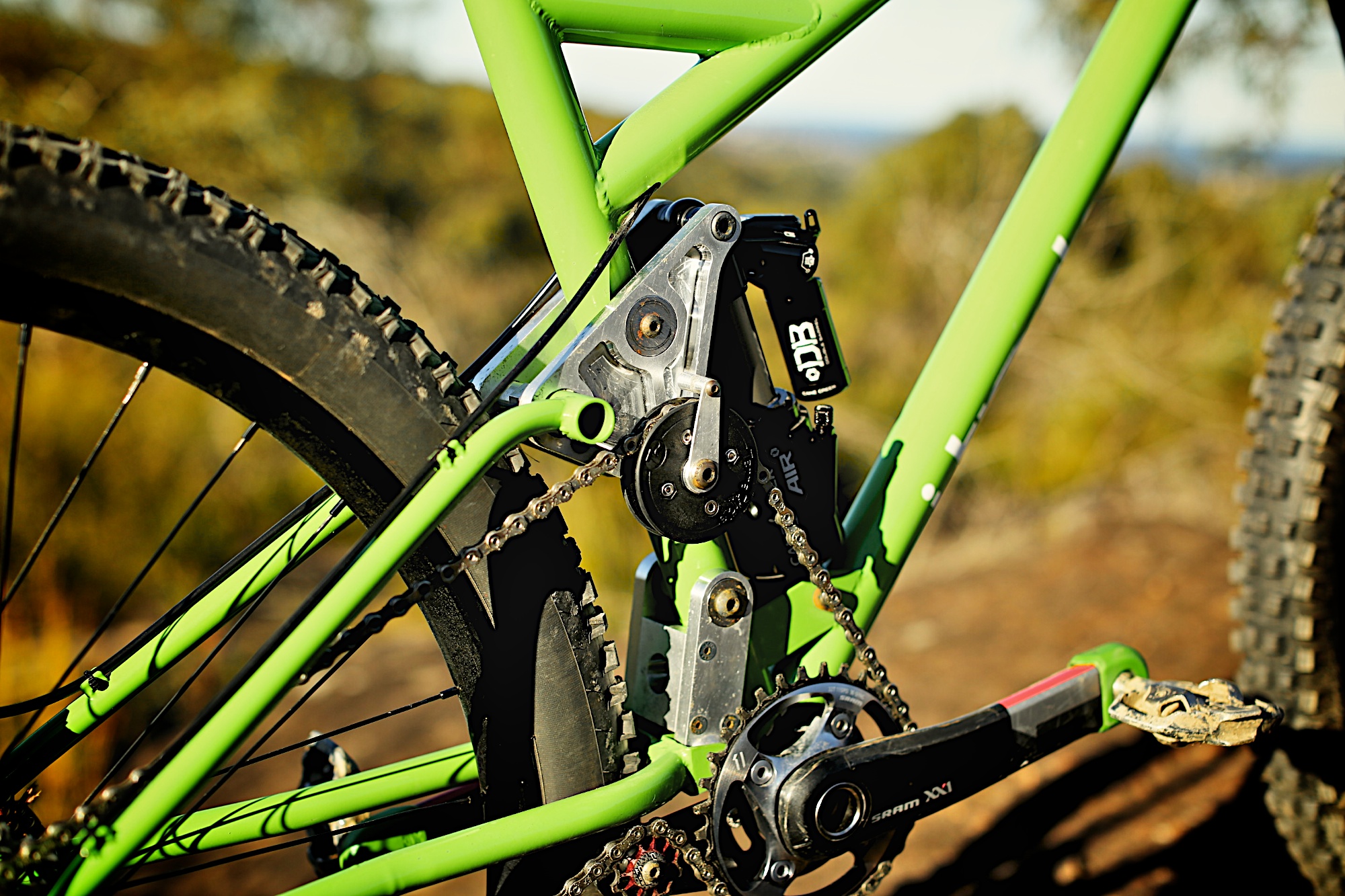 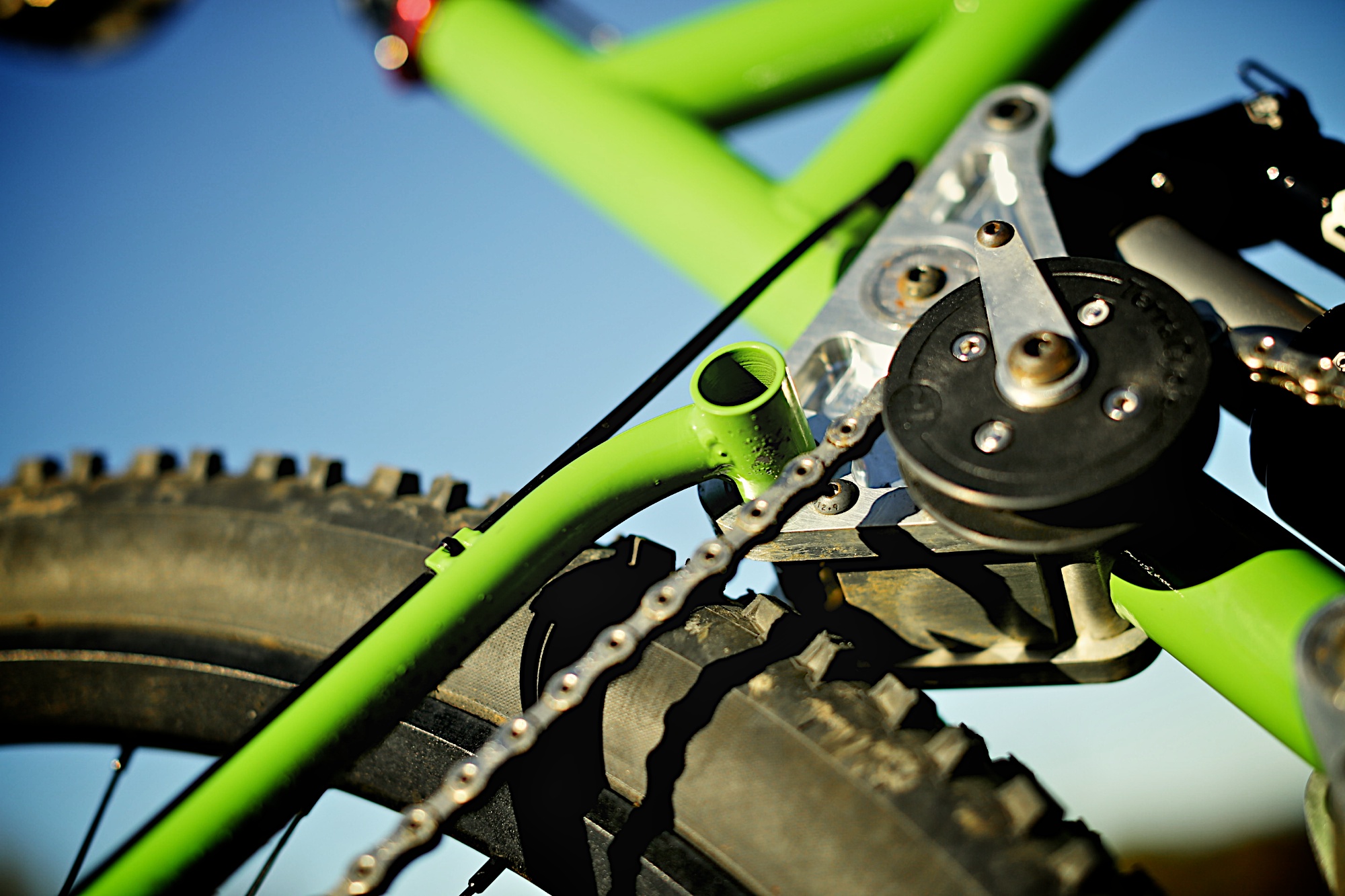 Curious to know more of the technical details? Luckily their website is loaded with more information than most of us can possibly handle. Check it out.

Suspension travel is 150mm, but if you measure the distance the rear axle travels, and not just the vertical path, travel amount is closer to 158mm. The fork is 150mm, and all the frame geometry and important angles that depict the bike’s handling are very much in-line with the popular 150-160mm travel bikes that we know and love already. Think Santa Cruz Nomad, or a Yeti SB66. Wheels are 650B, and with big tyres like we have here, it’s ready to mow down the roughest trails. 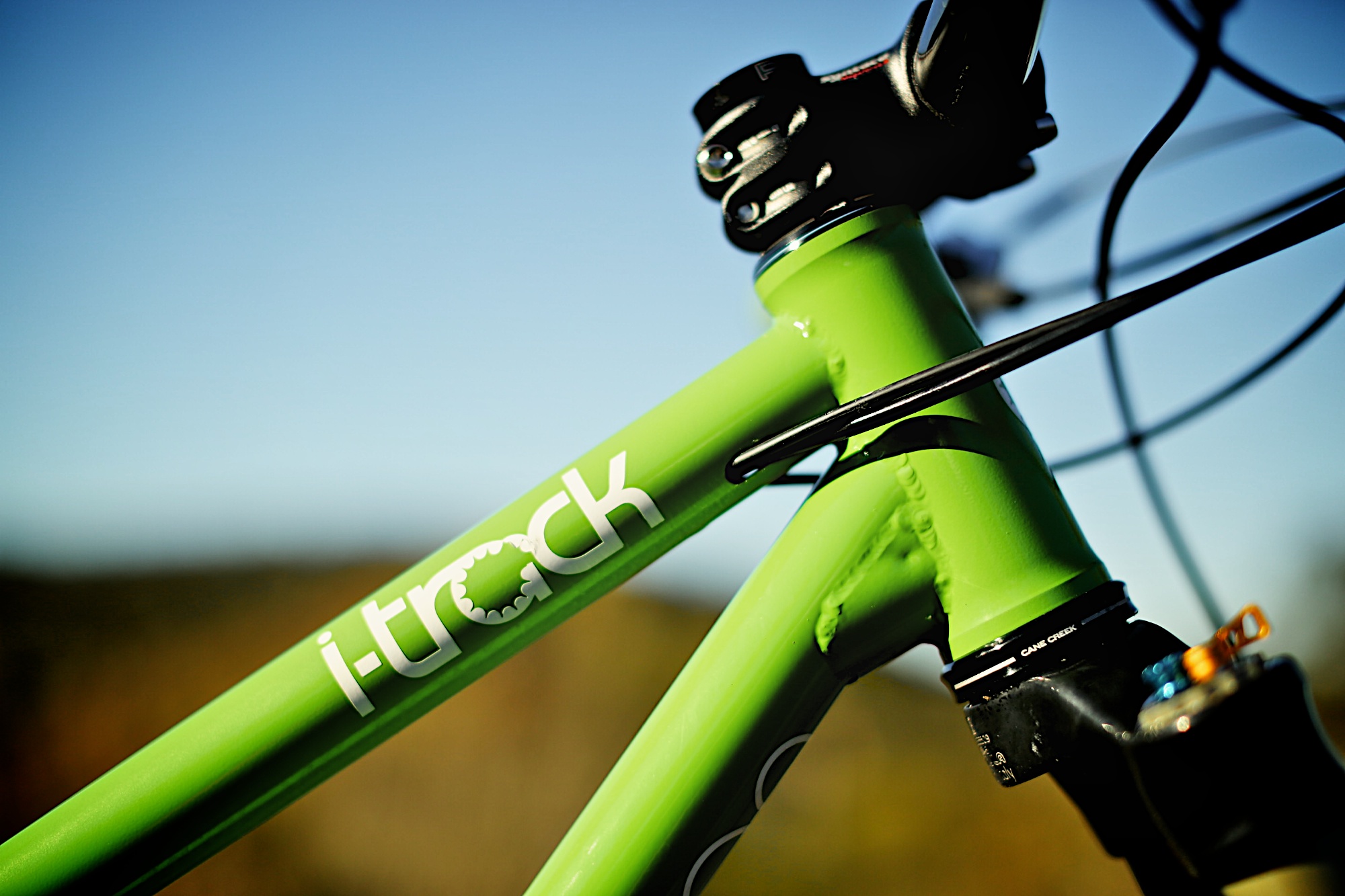 It’s a prototype, so the spec isn’t really the main point, but to credit to the frame builders – who obviously ride the bikes they build – the P3 is built up to best represent what the bike is all about. Big rubber, wide bars, short stem and powerful brakes allow the rider to let it hang out a bit, and hit terrain fast. A Formula fork is not something we see often, but its low weight and consistent feel is more than satisfactory, we reviewed one earlier this year.

Syntace wheels with wide rims and a ridiculously loud rear hub are another low weight but sturdy component choice for hard riding.

A Cane Creek Double Barrell shock is at the heart of the suspension, with a whole lot of adjustment to play with if you so desire, we left it as it came to us, but if we had the bike longer, some experimenting with the smorgasbord of compression and rebound settings would be an interesting process.

All this fuss, all this technical talk, what does it all boil down to? It has to be worth something, right? This bike works, and it works very well with the claimed benefits of the suspension design doing just what they intend to.

Pedalling into the trail for the first time, the bike felt so normal, the seating position was nicely centred, and the head angle not too slack for solid all-mountain riding. It was just when we started to pedal along a fire trail littered with loose rubble and embedded rock that we noticed things were very smooth indeed. The rear shock was hyper active, reacting quickly and effectively to the terrain, even whilst pedal forces were applying tension to the chain. 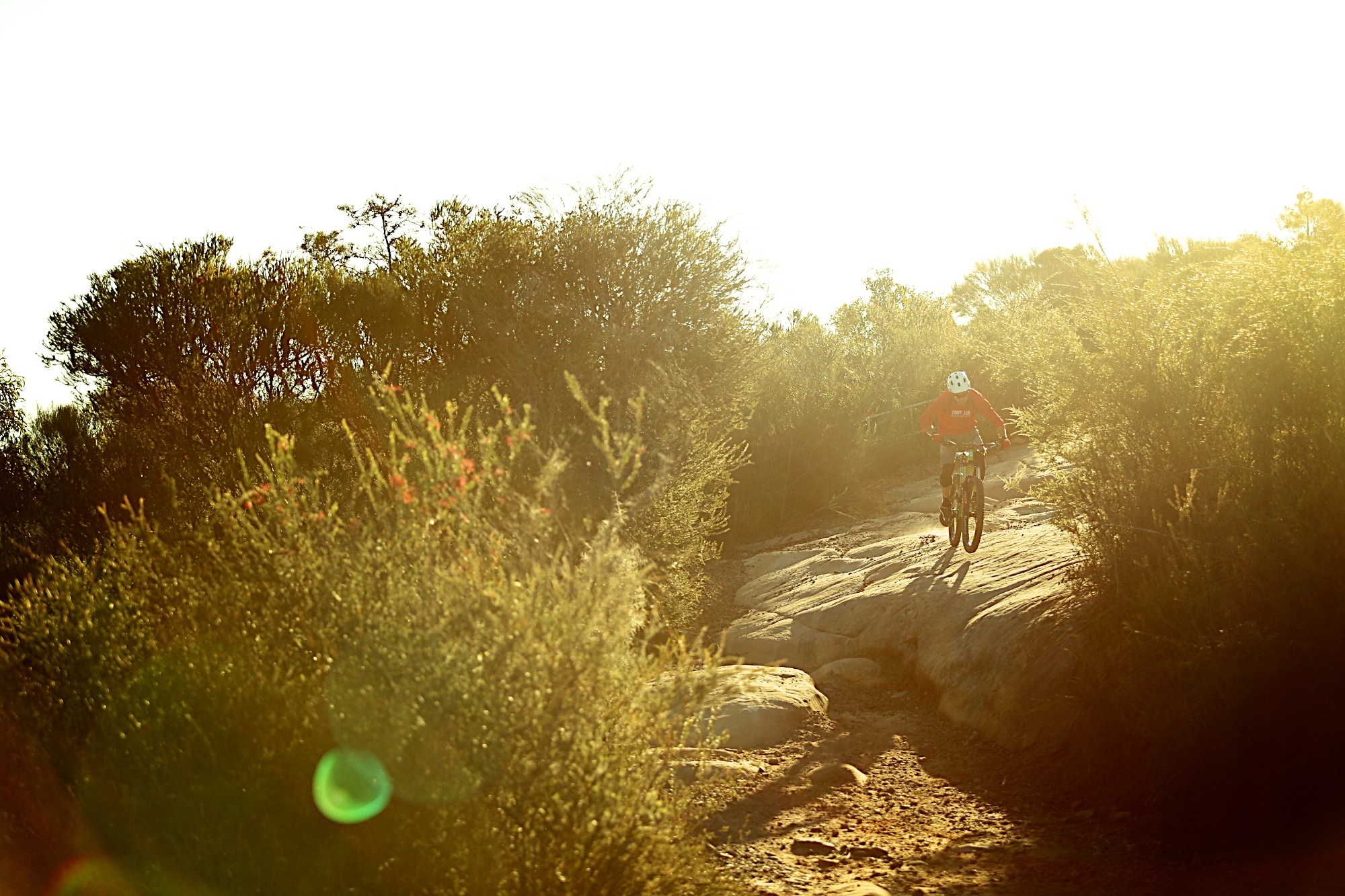 We were heading into Red Hill, in Sydney’s Northern Beaches, a long-loved testing ground for Flow’s test bikes. The washed out, rutted, stepped sandstone terrain was what we were after to push the iTrack hard. It loved very minute of it. With almost 160mm of rear wheel travel, the bike was always going to feel pretty capable.

But where it shines is hiding all that travel when pedalling. Despite its big and heavy tyres and overall mass, the iTrack didn’t feel too clumsy when winding through flatter singletrack, or climbing up pinch climbs on the trail.

We ignored the temptation to use the shock’s Climb Switch and found the iTrack worked a treat, resistant to getting bogged down but not stiffening so much as to sacrifice climbing grip. Sure, we’d still use the Climb Switch on a really smooth climb, but we didn’t feel it was needed off road. 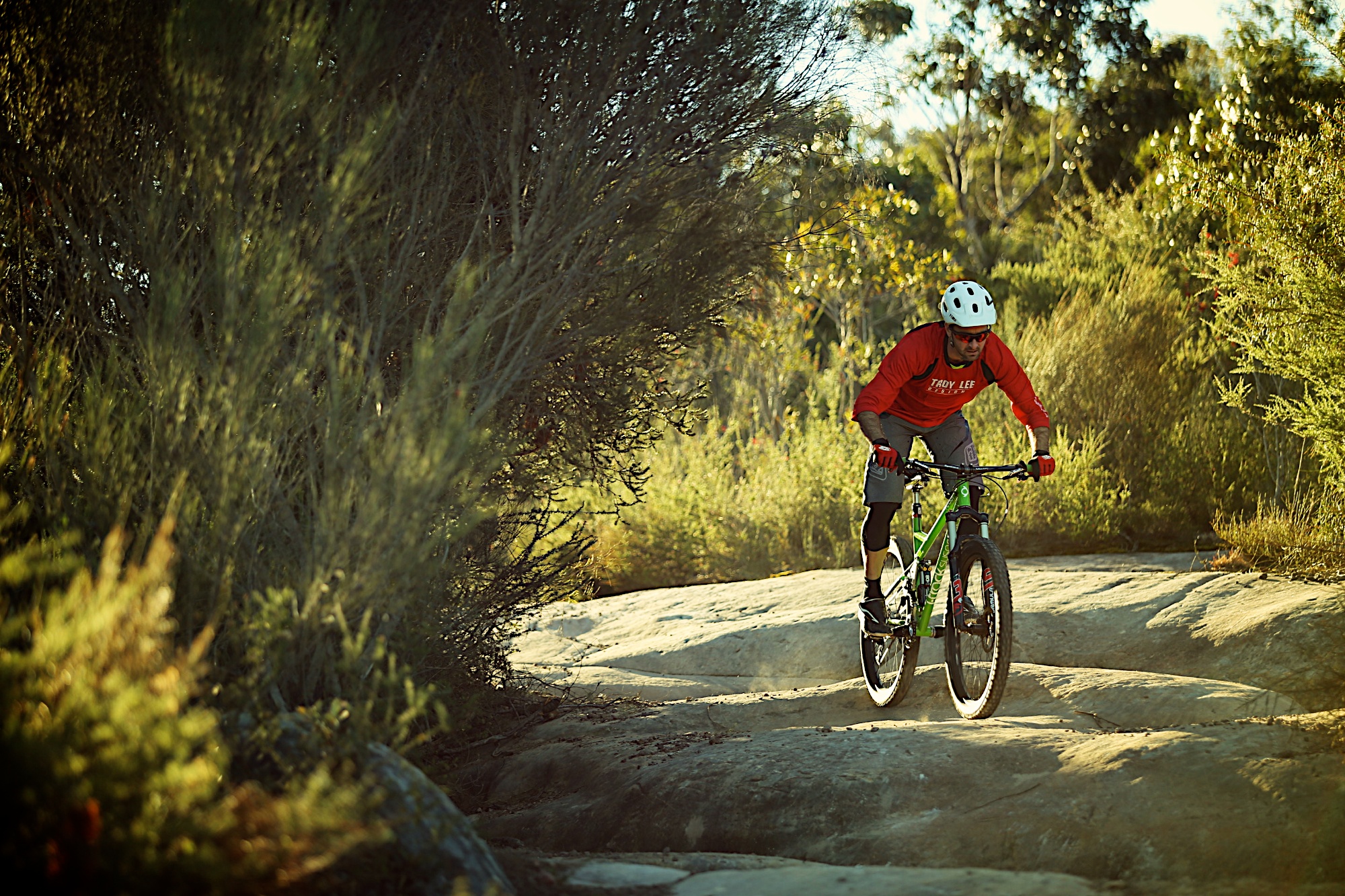 To be expected with a good whack of travel, it’s not a poppy or playful bike, rather a trail bully, with real attitude. It’s a bike that begs you to plough down the trail, rather than dart all over the place searching for a smoother line. Given how much the bike cries out for abuse, we did feel that the suspension curve needs a little refining still, as it’s quite hard to get the last 20% of travel out of the shock which makes the bike a little ‘spiky’ when taking on a flat landing.

We hope that these bikes make it into production. With a few refinements to the suspension curve and a lighter weight material used for the frame, this bike will be a fantastic machine.

Before we sign off this review let’s just clarify one thing. We’re not trying to sell you this bike as the latest and greatest, nor is iTrack Suspension aiming to steer you away from the big brands with claims that it’s better than anything else out there. This is simply a great and inspiring story, an act of passion for bikes, the engineering and design of mountain bike suspension and realising the dream of making something truly special that actually works.

They’ll be available for purchase one day soon, and that’s an opportunity to ride something different, with a story. So, before you say ‘why?’ try and think along the lines, of ‘ok, that made me think’.