No right/left leg power data.
Might not fit every frame due to chain stay clearance.

If you’re an avid racer, tech head, or if you’re the kind of rider who’s fond of a shave down and a macchiato at the local café while talking about carbon and KOMs, then you’re also probably familiar with Watts, power-to-weight ratios and functional threshold power. But if you’re like most mountain bikers, the world of ‘power’ is probably something you’ve never delved into.

In part, the absence of knowledge about using power as a tool for training/racing in mountain biking has been due to a lack of real power meter options that are suitable for mountain bike use. But that may be about to change.

Power is a proven and effective way of measuring your efficiency and strength on a bike. We’re all familiar with the concept of monitoring our heart rate as a way of training effectively, but power is a far better measure – knowing your heart rate zones (or spew threshold if you keep it old-school) is all well and good, but if you’re not moving the bike or draining the tank then knowing your heart rate doesn’t equate to much. Unlike heart rate, your power output is not affected by heat, caffeine, sleep, illness, stress etc – therefore, it’s a far more ‘pure’ measure of effort.

Roadies and serious mountain bike racers training on the road have been using power data and power specific training for a long time now. However with all the big name power companies so focused on road, the options for using power meters on mountain bikes have been few (not to mentioned incredibly expensive). In addition the focus on the road market has meant that the power meters available in the market have not always been suitable to the demands that mountain biking puts on equipment (mud, water, crashes etc). 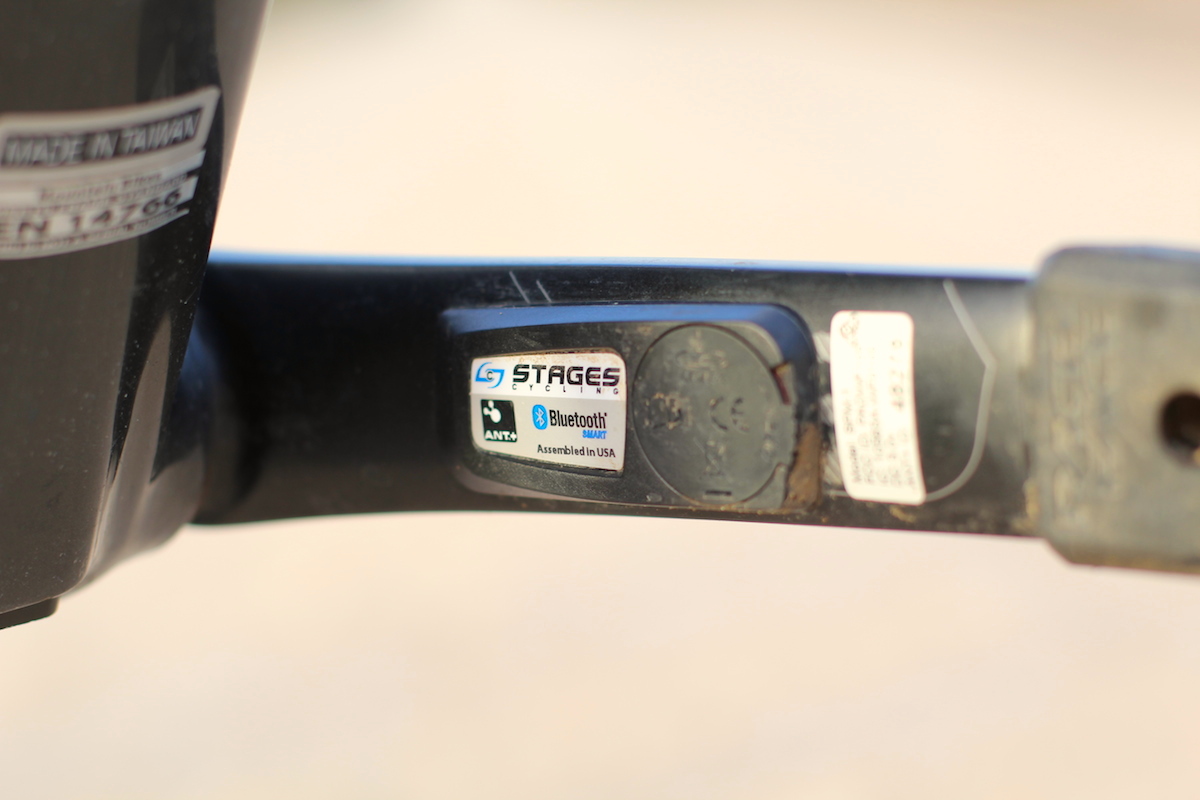 Enter stage left (get it…?) the Stages Power Meter crank, the first power meter solution that we feel is truly appropriate for mountain bikers.

We all know that the first component (in terms of leverage) in the transfer of leg power to rubber is the crank, so it makes perfect sense to use this as the point of power measurement. While other meters take their measurement either at the rear axle, pedal axle or crank spider, Stages have kept it simple and measure the strain/force applied to the non-drive side crank via a low-profile unit that is bonded to the crank arm and houses an array of sensors to measure crank flex (NB. You don’t attach the unit yourself – you purchase the whole crank arm assembly).The whole system adds about 20 grams to your bike, and because you’re simply replacing the crank arm, it takes about five minutes of your time to install, calibrate and sync with your bike computer. The meter itself seems bizarrely simple from the outside. It just looks like a plastic box, with a simple port to allow you to replace the battery.

The simplicity of using the non-drive crank provides multiple benefits, including the fact that the unit can easily be transferred between bikes. The Stages unit also serves to measure your cadence too, which isn’t so important on the mountain bike, but which is handy for the roadies. With the power meter running both ANT+ and Bluetooth communications you can sync it your GPS/head-unit or smart phone and if you have an iPhone you can run the Stages app, which also enables firmwear updates for the meter. There’s no Android app yet, but it’s on the way.

So, does it work? We fitted the Stages meter to our cross-country race bike to find out. Our test bike runs XX1, with carbon cranks. While carbon is light and stiff, it’s not predictable enough for use with the Stages system as it doesn’t flex in a uniform manner. This means that XX1 users will need to run an X9 Stages meter, with an alloy non-driveside crank. Much to our joy, this mismatched setup only adds 40g to the bike, which was a real surprise given the price premium for an XX1 crank over an X9 crank!

Having the ability to review our power output on the fly makes a huge difference for both training and racing.

We’ve been running a Stages X9 crank on the Flow rocket ship for a while now in preparation for the race season and the inaugural Port to Port and we can happily say that we have been mightily impressed. Having the ability to review our power output on the fly makes a huge difference for both training and racing. This was highlighted particularly during the Port to Port MTB stage race when our heart rate monitor stopped working, yet the power data meant that we could continue to monitor how much work was being done and how much effort could be sustained on the long flat sections of the race without blowing up. 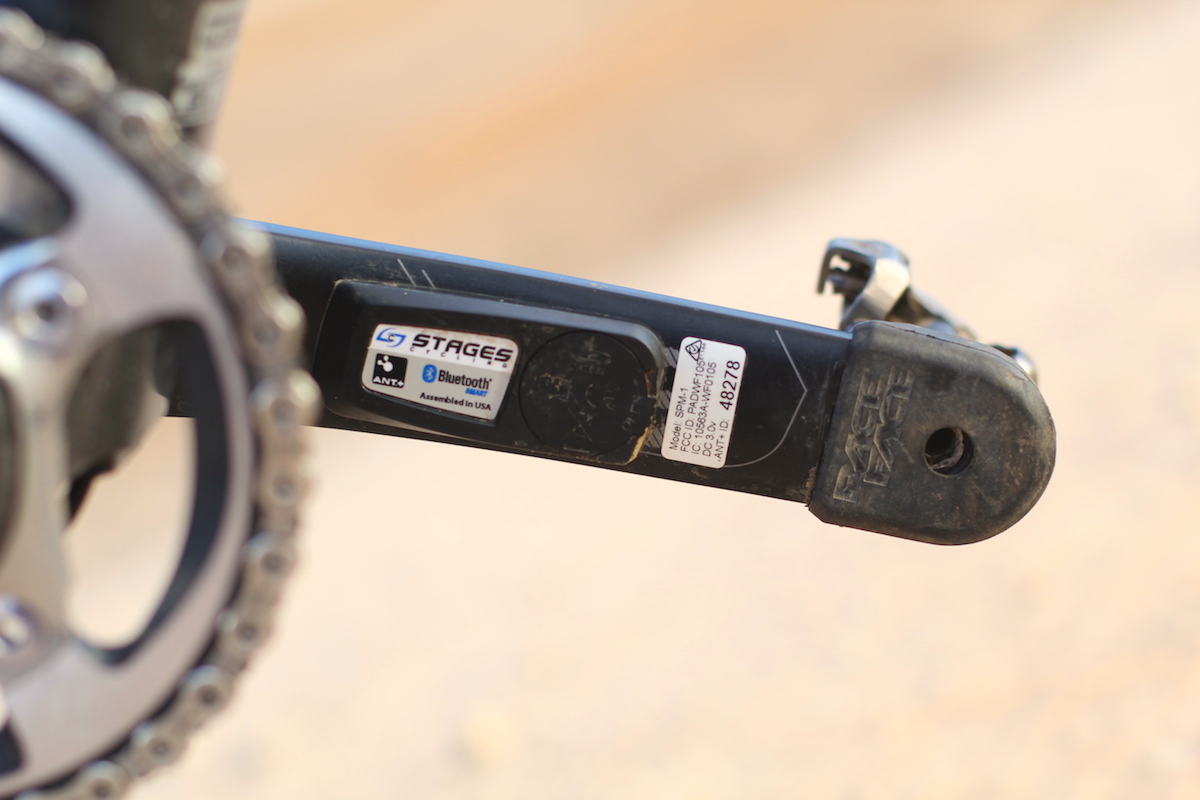 While there have been some reports of the Stages power meters faltering in wet weather, we can report that we have had zero problems. In fact, through all the mud, sand and salt water of Port to Port, the Stages power meter was one of the only elements on the bike that didn’t need attention. We’re talking near complete submersion in salt water here!

In fact, the only attention that the Stages needs at all on a (semi) regular basis is periodic recalibration or ‘zeroing’ to ensure it remains 100% accurate, which is done via your head unit (in our case, a Garmin 510). This isn’t necessarily vital though, but it does ensure 100% accuracy of the power readings.

Suffice to say we have been mightily impressed with the Stages Power meter. Its strength is in its apparent simplicity and robust construction, allowing mountain bikers to finally have the same training and racing information that was once limited to the pros. We have the power!

Side note: While testing the Stages Power meter we did hear of other users having issues with battery life, however we did not come across this on our X9 crank. When discussing the issue with Stages, they informed us that they had addressed the problem via a firmware update that can be transferred over Bluetooth to your power meter via your iPhone Stages app. While this app is not presently available for Android, it’s in the works.