Like seeing a mate sporting a comical attempt at a Movember moustache, your first impressions of the Trek Stache are probably going to involve a little confusion and trying not to laugh.

Huge amounts of traction from the 29+ tyres.
Stranglehold dropout allows for 29+, 29" or 27.5+ wheels.
Geometry is fun and lively.

As we’ve learned over the past few weeks, however, first impressions aren’t everything, but we certainly have done a lot of laughing whilst riding this thing, it’s a whole lot of fun!

Ahead of our review, here is a little preview of this very unique bike.

Oh, and does anyone know what a Chupacabra actually is?

The Trek Stache is a quirky beast, an aluminium hardtail from Trek that rolls on with ginormous 29+ wheels, that’s a 29″ wheel with 3″ tyres. Mounted to 40mm wide rims the wheels look huge and could probably float if we dropped it into the lake while taking pretty photos, we didn’t though, promise.

If you want to know more about why Trek decided on 29+ wheels, rather than the more common ‘plus size’ industry standard of 27.5+, check out our interview with Trek’s Travis Brown about the development process for the Stache.

What on earth for?

The Trek Stache 7 is designed to be an alternative to a dual suspension trail bike in the 110-130mm travel range. Whilst the Stache is a hardtail, its unique 29+ tyres with massive volume are paired with slacker geometry angles than you would regularly see on a hardtail, such as a 68.4-degree head angle, as well as crazy short 420mm chain stays (which are adjustable depending on wheel size and rider preference).

Can 29+ wheels give this bike a degree of suspension?

This is a question we’ll answer more in-depth in the review, however, what we’ve learned in our time on the Stache so far is that asking if the bike replicates the abilities of a dual suspension trail bike is not the right question to be asking.

The Stache’s strengths include insane levels of traction and a geometry aimed at being able to throw those big hoops around at will. These attributes mean that the riding style required to get the most out of the Stache is different to how you would ride a standard dual-suspension trail bike.

Is this even possible? Could Trek be onto something here? Stay tuned for the review where we’ll discuss this further.

Is there an option to swap wheel sizes if I don’t like the 29+ wheels?

Despite the Stache being more open to change that Donald Trump’s policies, we would definitely recommend giving the Stache a good crack in its original 29+ guise, as the benefits of the 29+ tyres are really what make this bike shine.

What advantages do the 29+ wheels provide?

The huge contact patch of the tyres, which can be run at very low pressures when setup tubeless (the Stache ships with rim tape installed as well as tubeless valves) gives insane cornering grip as well as small bump sensitivity to compensate somewhat for the rigid rear end.

Tyre pressure setup on the Stache is more critical than for most other bikes, so we’ve been experimenting with different setups to get the best combination of traction, tyre stability and rolling efficiency.

What about the spec?

The aluminium Stache 7 retails for $3299, and includes a Manitou Magnum fork with 34mm stanchions and 120mm of travel, a Sram groupset consisting of 1×11 GX gearing and Level Trail brakes and most of the finishing kit is handled by Bontrager.

The Bontrager Chupacabra tyres have a tread pattern that sits somewhere between a Bontrager XR2 and XR3, and are a good fit out of the box for the Stache. Trek have specced the Stache with SUNringle DUROC rims- we’re interested to see how they perform throughout the review.

Out of the box, the only issues we’ve identified are the befuddling Manitou fork axle, which takes the humble thru-axle to a perplexing level of complexity, and the non-lock-on Bontrager Race grips, which feel very squirmy underhand.

This bike begs for a dropper post! For a bike with such reckless and fun riding capabilities like the Stache, a dropper post is a no-brainer in our eyes. 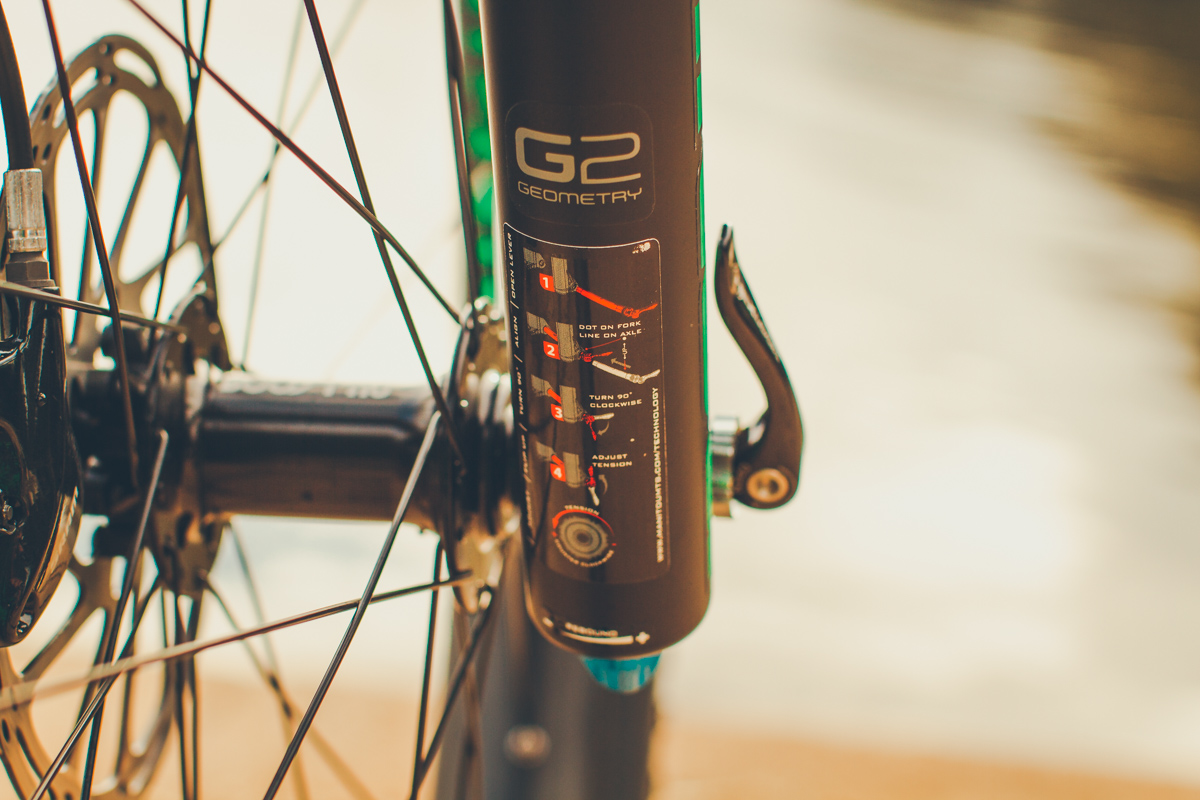 You shouldn’t have to complete a degree in engineering to secure your fork axle.

Where are we going to ride it?

Everywhere! We’ll be riding this bike on all the trails we would normally ride with test bikes, to see if it’s a realistic alternative to a dual-suspension trail bike, so watch out for a full review soon.