After 20 years the French mountain biking luminary is stepping back from professional racing and will take a new direction, we'll still see him lining up at some events but for different reasons.

We had an absolutely fantastic opportunity to spend a few days riding and shooting the breeze with one of our greatest idols, but to our surprise we felt like we already knew him, his warm and friendly character and unrivalled passion for the sport is infectious. We're huge fans.

Through the highest of highs and the lowest of lows, Fabien has been there and done it all. From winning multiple Downhill World Championships to dealing with horrific injuries, to transitioning from downhill across to enduro and winning the first ever Enduro World Series round.

So what’s he up to? What’s he think of the state of enduro? Where will bike geometry be heading?

FB – Haha, yes I’m a retired man! But only from racing, I think people forget that I’m only retiring from racing. It’s a big thing for me but not necessarily new, I retired before from downhill racing in 2011, and had 2012 completely just for fun. 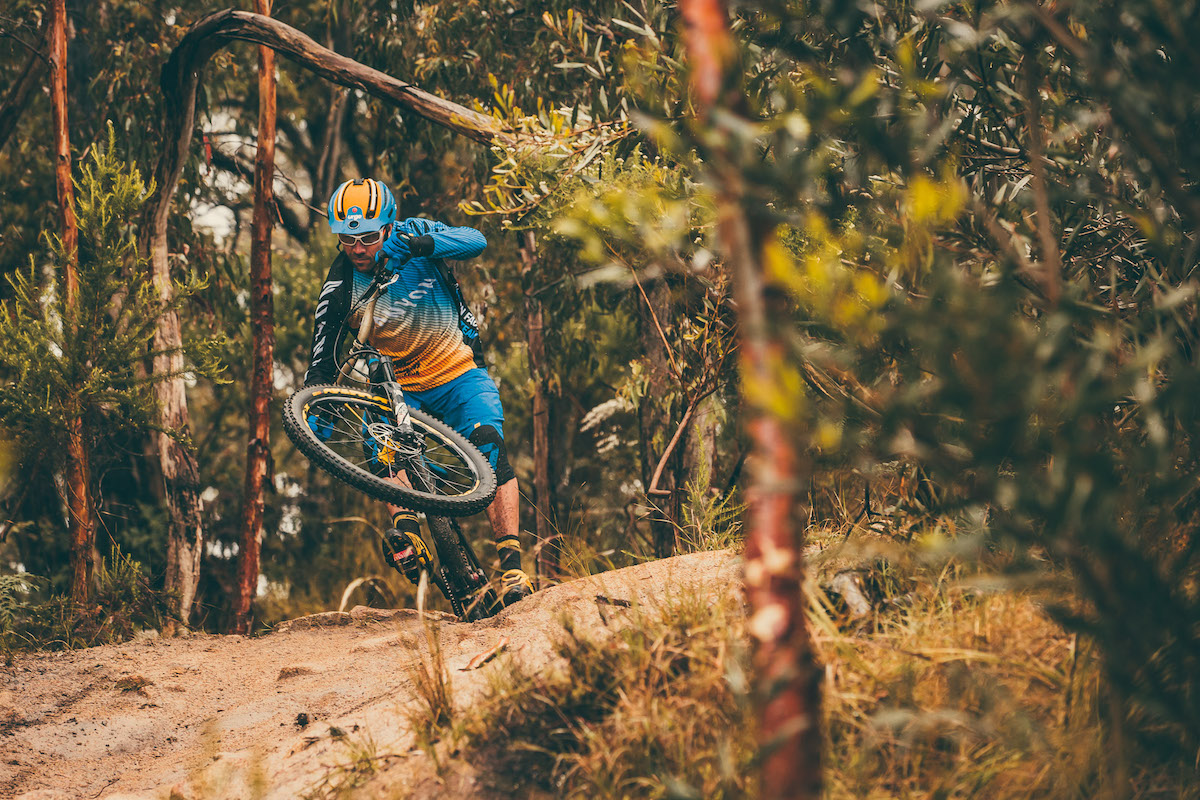 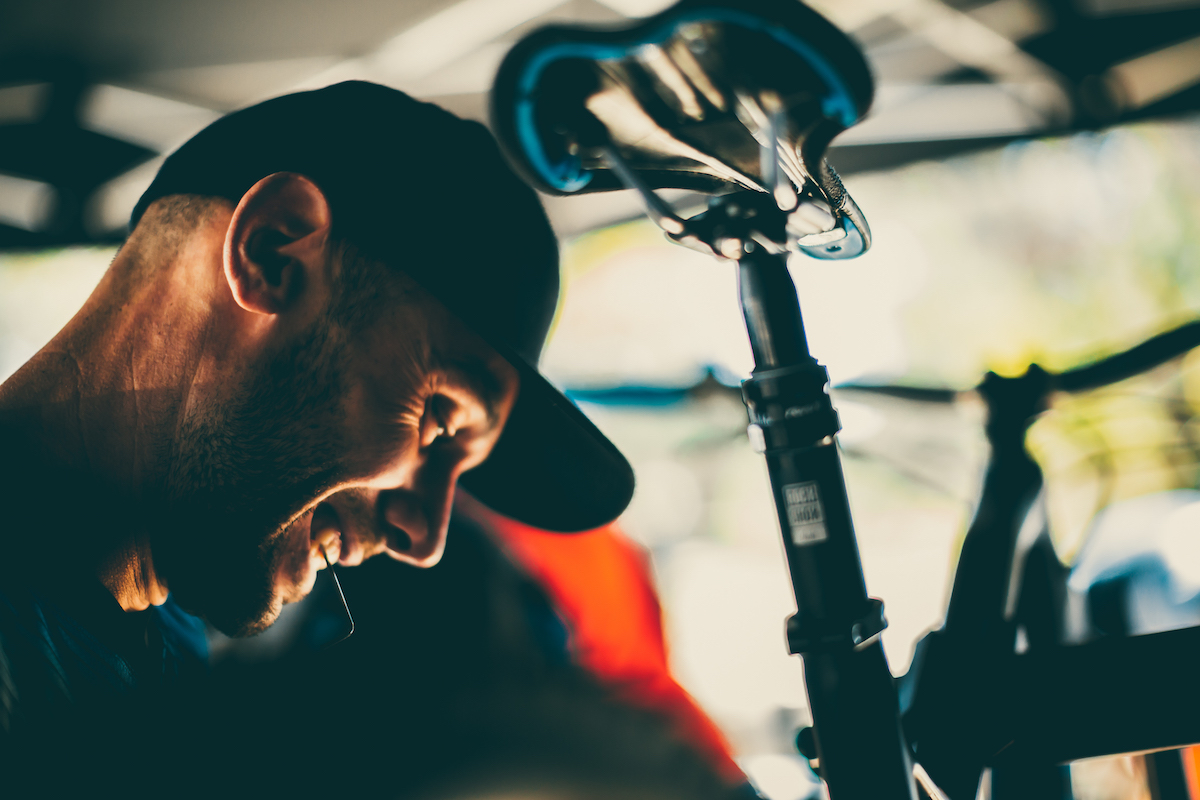 F – So why did you retire from downhill and come back to professional sport for a spot of enduro?

I committed to Enduro for three years with Canyon not for a new career, but because we were developing the Strive.

I believe that racing is the best way to test and develop new technology on a bike, so that is why I came back to Enduro, the plan from the beginning.

F – If there was no bike development on the cards, would you have still returned to racing?

FB – No, I don’t think I would have committed to Enduro. I was so glad to see the EWS take off, and was happy to help and be an ambassador coming from other sports of mountain biking. It’s a great new discipline that’s being developed, great for the industry and anyone who doesn’t want to commit to full on downhill or race cross country. It’s really proper mountain biking racing.

Downhill is my passion and I still really, really love it, so to re-learn my bike setup and physical preparation for enduro was a challenge that really excited me. 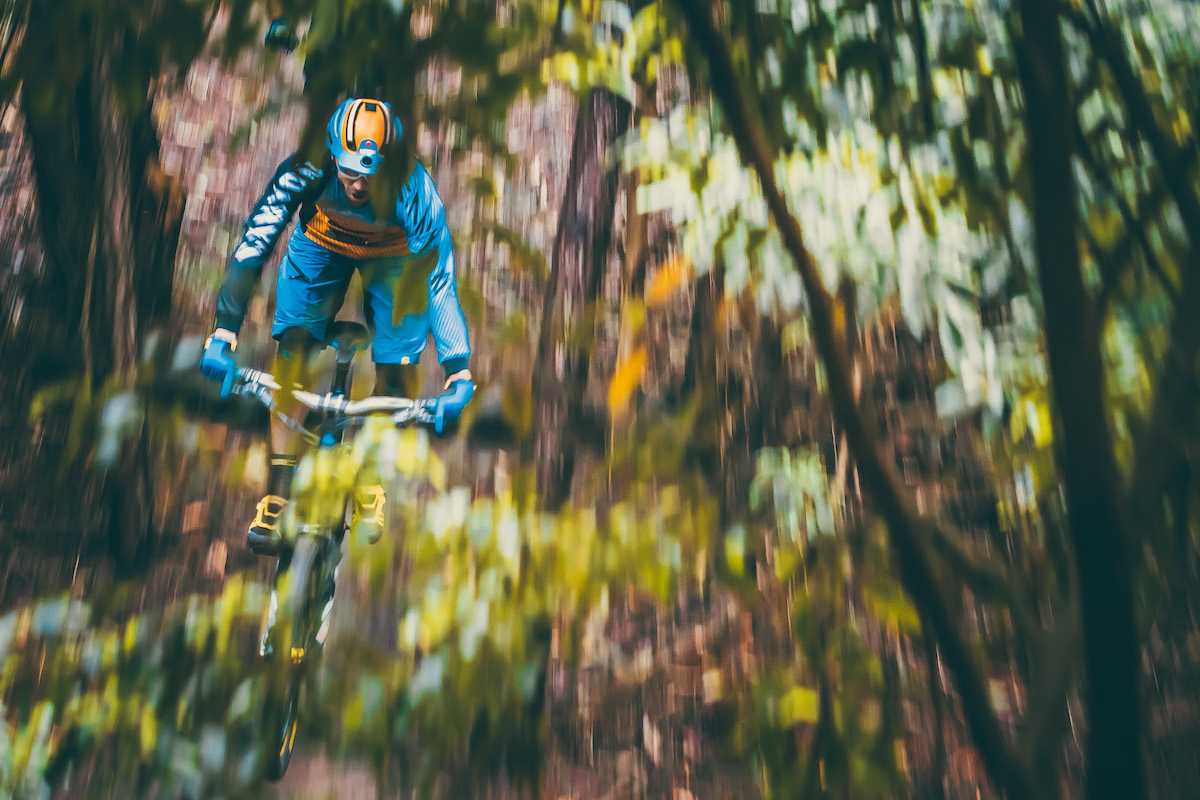 F – How was the transition from downhill to Enduro for you?

FB – It’s a completely different approach, to be honest after three years now of enduro I am only now understanding it completely. The physical side is so different, instead of preparing for short and powerful for a matter of seconds in downhill, you need to go up to three minutes of that same intensity. I’ve still not been able to transform my body, after 17 years of DH. I wasn never great at long pedalling stuff, and even though I tried at 35 years old, my body found it tough to re-shape in that capacity.

At the start I thought I’d just need to commit like downhill racer, but pedal like a short track racer.

It was so much more than that, the tactic, energy management even the way that you hit the lines on the track is different, and you need to bring all this together staying focussed.

If you lose control of your vision, it’s no good and there’s a lot of risk, as much a downhill, the speeds are just as high while the bikes are smaller. 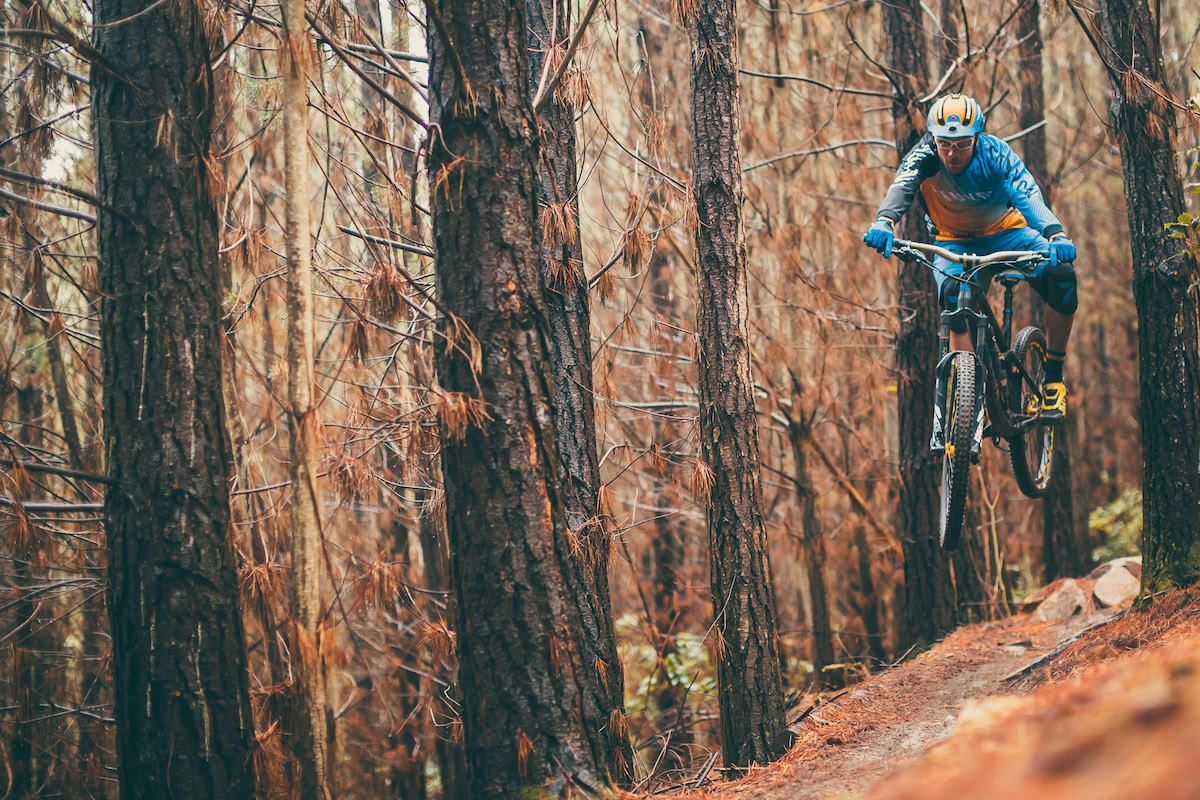 F- In France the sport of enduro is not new, what was it like before the EWS brought it to the international mainstream?

FB – EWS brought worldwide visibility and professionalism and along with that came the industry support, rivalry between riders, a bit of animosity too. You don’t have pro racing without this. We had this crazy meeting between riders with a remark that we should all have the same salary, so there is no more competition, but then there is no more competition on the race track, who is going to be first and who is going to be second? That’s racing!

F – From your point of view, what’s the key ingredients for the best enduro race course?

FB – As a new sport the ‘vision’ from one person to another is radically different. I still believe that the base of enduro has grown in France and in Italy through the fact that people are not particularly trained physically, they want to ride their own pace to the top of the mountain and once they reach the top they want to enjoy their ride down all the way to the bottom. Enduro is still a mass sport, not like you have in downhill or cross country it has the ability to bring in all people together from the beginners up to the elites. That’s the root of the sport for me is the key to keep it.

Making times too short to reach the top of the mountain and penalising those who take too long is wrong, and making stages that are too physical to the point that people don’t enjoy there way down is also wrong. There’s a thin compromise, time should be spent 80% descending, 20% pedalling up. That average makes sense to me, but unfortunately we can still be far from it sometimes. 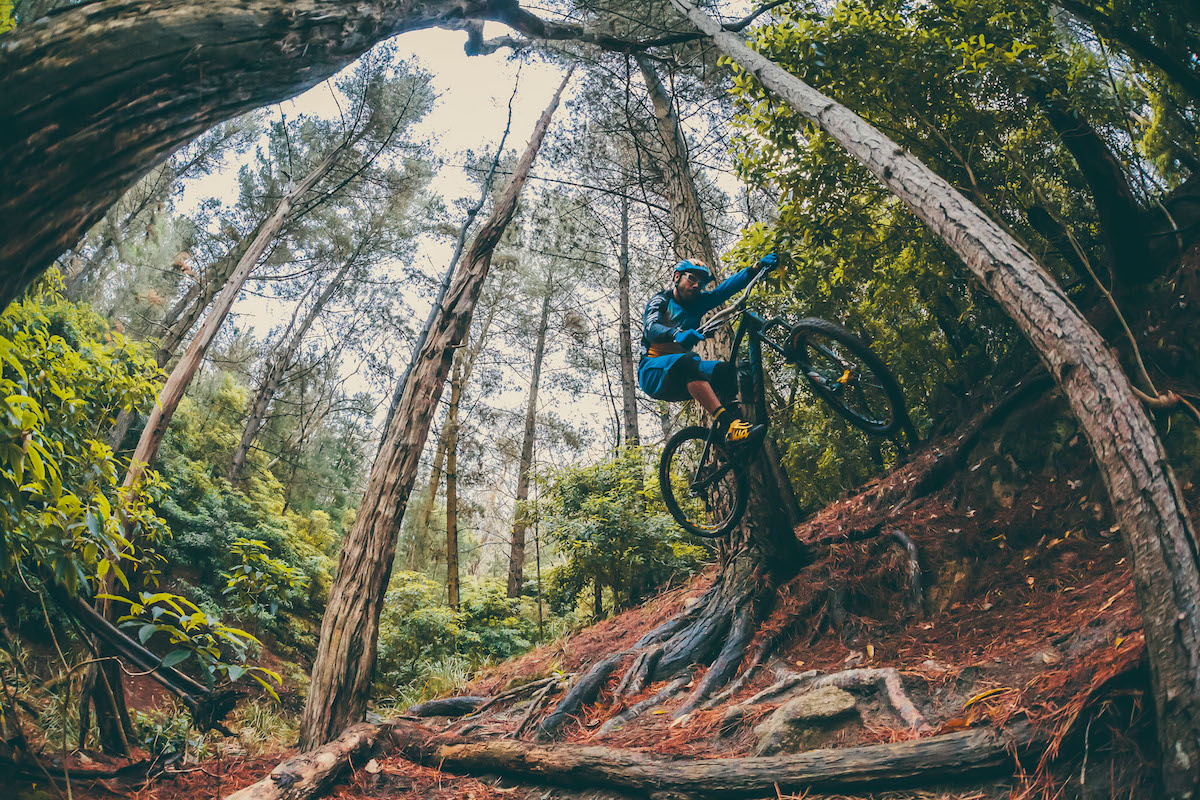 Enduro is about enjoying the way down. And the best events are festive, there’s a good atmosphere and parties around the event. For me it’s more than just the track, it’s the whole event.

We’ve seen organisers put in so much effort to make it work, they are learning as much as we are.

There needs to be a tight relationship and communication between riders – elite and amateurs – and organisers. That’s how it’s going to work.

The EWS is still new, and there may only be a few people making the decisions. It’s hard to find the perfect balance of rules that will produce a culture that’s a product of a fair amount of training, local trail knowledge etc. It’s a complicated sport, much more than downhill or cross country that’s for sure. 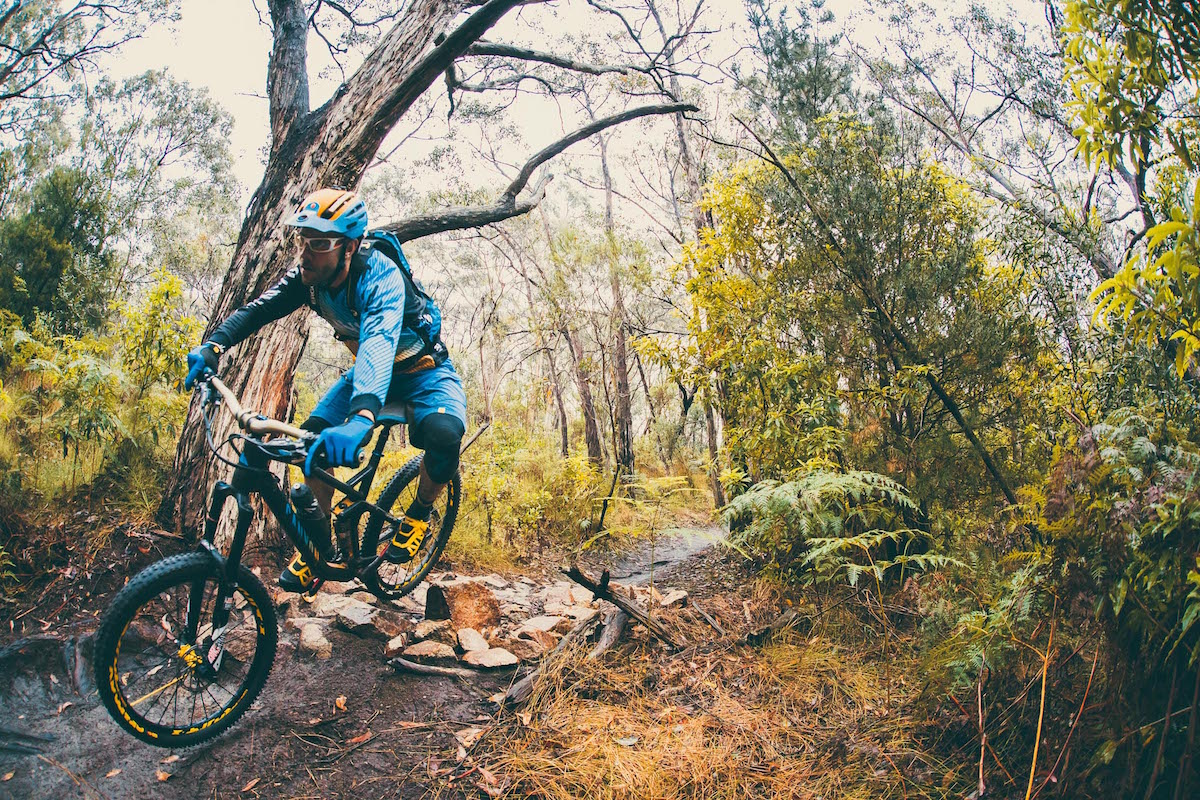 F – Ok, here’s a curly question for you. Who would do better in a season of enduro out of these two riders. A super fit downhill racer, or a technically skilled cross country racer?

FB – Tough question! Generally good technical skills is needed to get anywhere, you are riding in anticipation where you don’t know the tracks perfectly. On the other hand you need you need to manage a whole weekend of racing.

For example you could take Sam Blenkinsop, he’s an amazing technical rider that is so fit, he’d kill it in enduro, same for a rider like Greg Minnaar. Then you could look at Nino Schurter, who’s also so good technically and obviously of high fitness performance, he’d be in the top five no problem.

F – Who were the enduro riders that you looked up to in the early days?

FB – Jerome Clementz, he was on the top of the game on the first year and so was Nico Vouilloz was, they were a step ahead on year one as they had much more experience on the discipline even before the EWS.

F – Let’s look at your bike setup, why the asymmetrical cockpit and brake lever heights?

FB – I broke my shoulders in the past and my shoulder level are not the same anymore naturally. The different brake lever heights forces my hand position to be different and that modifies my shoulder height. It gives me a possibility to have a good handling position of the bike’s mass. 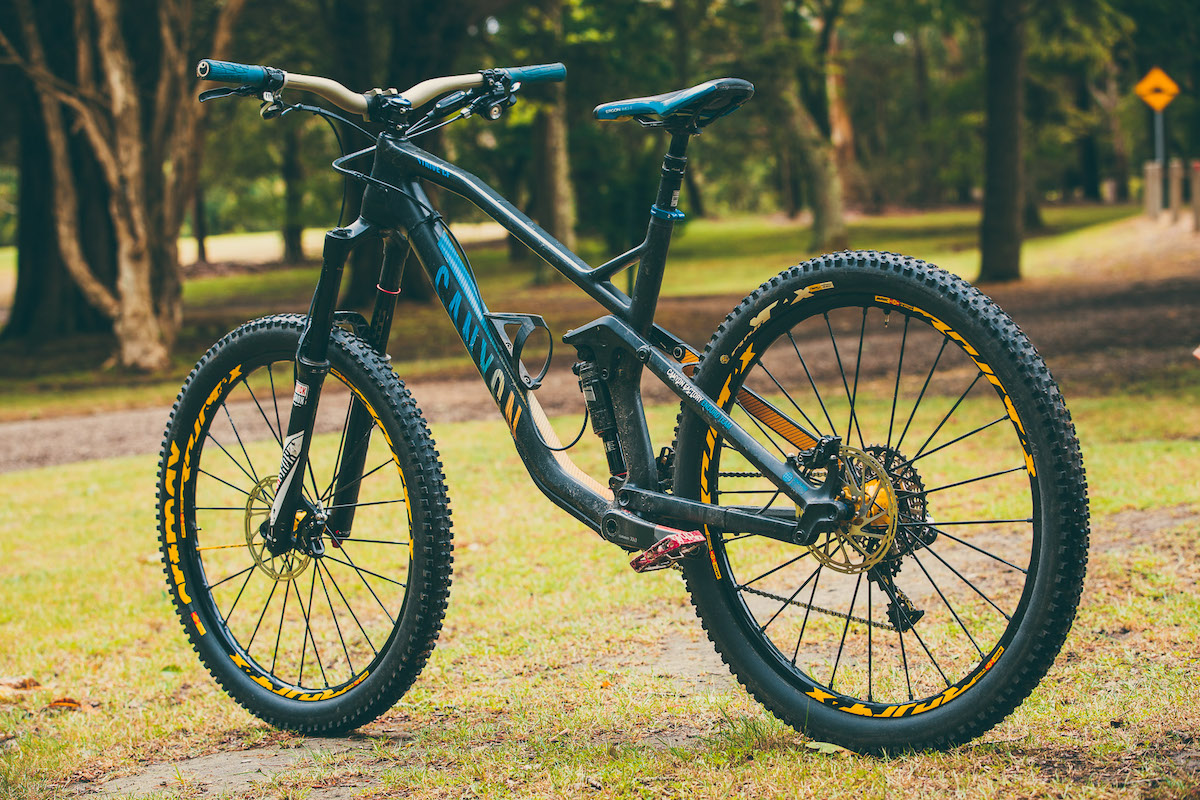 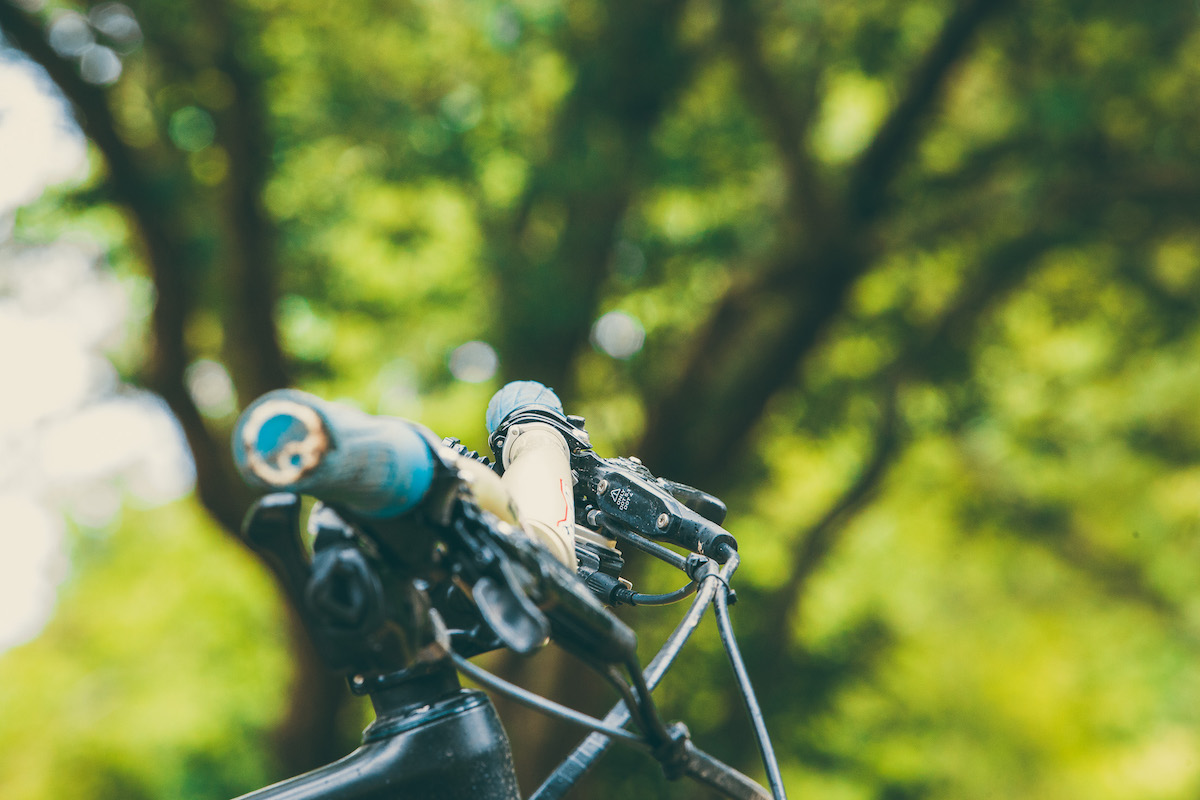 F – Working with Canyon, what is your role with bike development?

FB: I work tightly with the engineers to bring ideas at first to design the bike, and then work on all testing to finalise kinematic, and geometry. I like the fact that I am involved at all levels and that there is a mutual confidence on our collaboration. Canyon is a big company but is managed and owned by one person, Roman Arnold. Our relationship is a real synergy where we bring all of our capacities and experience together. 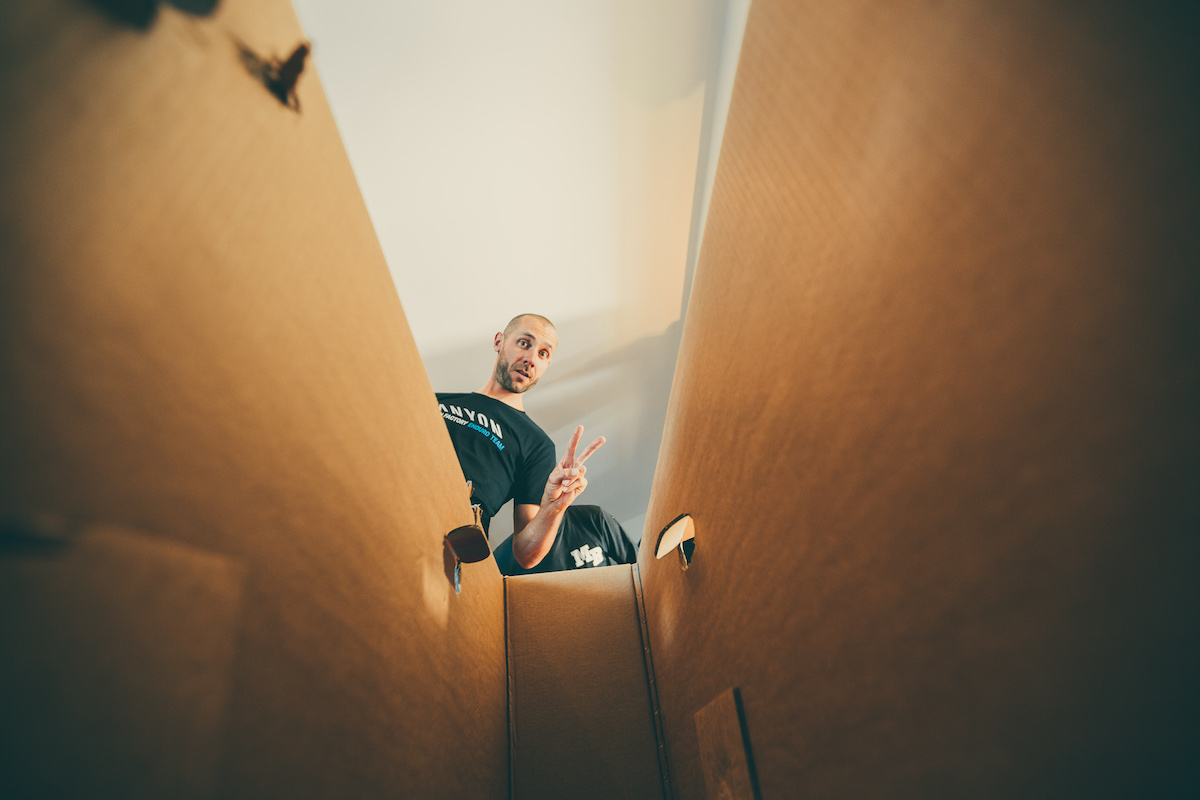 F – What does it take to be useful to Canyon at assisting in product development?

FB: It obviously takes commitment to the brand, to give and invest yourself at all level. I could simply take myself as a rider and do a simple Job. But I am passionned by mountain biking, from racing, to all aspects of the industry. The process is fantastic when you imagine that I could work from first drawing of the bike to bring it all the way to the top of a race podium. There is no better satisfaction for me. You can’t find your “work” (if you can call that work) more valuable.

F – What was the hardest aspect of the Shapeshifter design to get right?

FB: The hardest point was to find a system that could work with the shapeshifter concept and still provide a good kinematic. We have internally a fantastic engineer – Vincenz Thoma – who managed to develop a process optimising all of our research. Everything became suddenly very simple and evident.

It was a thin compromise to find between length and head angle. I do believe that we have room for another size up but it would only be for very very tall people. But I do not think that going slacker or longer would have been an option for the average rider.

F – Do you think the super long Race Geometry is ahead of the times?

FB : I think it has been. I do believe in long bike as long as the front part of the bike is stable and that the rider moves weight over the front.

Habits are changing as forks are working better with a more progressive spring force, so front triangles are getting longer. The understanding of reach and stack are bringing people in more understanding of where they should stand on the bike. All this radically change the riding styles and expectation in terms of geometry.

Look now, everyone has been following.

Canyon to sell Down Under, how it’s going to work.